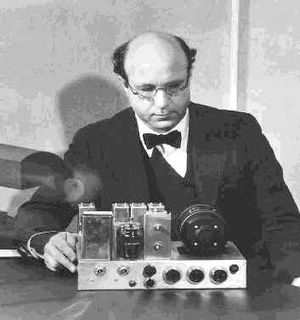 Photograph used by permission of Motorola

A major advance in police radio occurred in 1940 when the Connecticut state police began operating a two-way, frequency modulated (FM) system in Hartford. The statewide system developed by Daniel E. Noble of the University of Connecticut and engineers at the Fred M. Link Company greatly reduced static, the main problem of the amplitude modulated (AM) system. FM mobile radio became standard throughout the country following the success of the Connecticut system.

The plaque can viewed at the Department of Public Safety, Division of State Police, 1000 Washington St., Hartford, CT 06101.

In 1939, Edward J. Hickey, Commissioner of the Connecticut State Police, asked Daniel Noble, a professor of electrical engineering at the University of Connecticut, to design a mobile-radio system for the State Police. A one-way system was suggested, but Noble, who had designed two-way AM units and FM broadcast stations, recommended a two-way, FM system. Receiving the go-ahead from Hickey, Noble drew up a circuit design and specifications, from which a practical unit was built by Fred Budelman, chief engineer of the Fred M. Link Company. Noble later said that the success of the system was due to choosing phase modulation, selecting proper station sites, using rooftop antennas on the cars, and employing different transmitting frequencies for the base stations and mobile units. The system began operations at Hartford in 1940, signaling the nationwide switch from AM to FM.