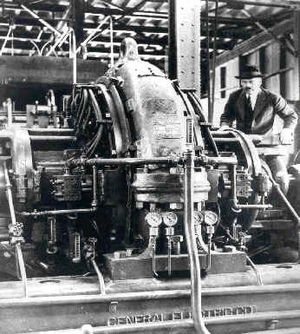 The Alexanderson radio alternator was a high-power, radio-frequency source which provided reliable transoceanic radiotelegraph communication during and after World War I. Ernst F.W. Alexanderson (1878-1975), a General Electric engineer, designed radio alternators with a frequency range to 100 kHz and a power capability from 2 kW to 200 kW. These machines, developed during the period 1904 to 1918, were used in research on high-frequency properties of materials as well as for international communications.

The plaque can be viewed at the General Electic Company, at 1 River Road in Schenectady, New York.

The development of the Alexanderson 200kW transmitter was a major breakthrough for wireless communication and was responsible for:

The formation of the first American controlled important wireless communication company, the Radio Corporation of America, in 1919.

Dependable day and night wireless contact with our allies in WWI by way of the Navy operated American Marconi station at New Brunswick, NJ.

Our only reliable contact with Germany towards the end of WW1 as Germany's cables had been cut.

In 1904 Reginald Fessenden ordered from General Electric a unit to generate AC at a frequency of 100 kHz. This order was given to E.F.W. Alexanderson to design. He has joined the A.C. Engineering Department of General Electric in 1902.

Alexanderson made tests on special Swedish iron strips 1 1/2 mils thick in strong magnetic fields at frequencies up to 200 kHz. He found the iron would operate satisfactorily at 100 kHz and therefore designed the alternator with an iron core. Fessenden rejected the design, insisting that his machine be built with a wooden core as he was sure iron would be melted in a strong field at such a high frequency.

GE built the machine with a wooden core that generated 1 kW at 50 kHz frequency in 1906. Fessenden used this for his famous tests made at Brant Rock, Massachusetts Christmas Eve, 1906, when he broadcast voice and music heard as far away as Norfolk, Virginia.[1]