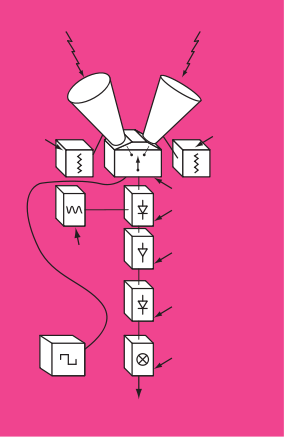 A microwave radiometer is a very sensitive electronic instrument that measures the amplitude (or strength) of microwave signals. Microwaves are electromagnetic waves from the central region of the electromagnetic spectrum, that is, waves having wavelengths shorter than radio waves and longer than light waves and x-rays.

Almost all objects in the universe emit microwaves. In a process known as remote sensing radiometers are used to detect their presence and learn about them. A large antenna is needed to detect weak radiation. In fact, the weaker the radiation strength, the larger the antenna needed to detect it. For example, the sky radiates very weakly and is regarded as a cold radiator. Water typically radiates more and grass is even warmer (hence radiates still more). These objects can be detected equally well during daytime and nighttime by using microwave radiometers. Microwave radiometers on spacecraft, with antennas pointed downward, can provide images of thunderstorms, land, forests, surface soil moisture, forest fires, vegetation, rain clouds, oceans, sea ice, and more. These observations help us to better understand our planet and its climate.

Radiometers mounted in telescopes are called radio telescopes. Radio astronomers use them to detect celestial bodies, galaxies, and gaseous media. Scientists continuously report new discoveries, but as much as we know about the universe, much more remains unknown.

Retrieved from "https://ethw.org/w/index.php?title=Microwave_Radiometer&oldid=154706"
Categories:
This page was last edited on 12 April 2017, at 13:51.
About ETHW
Policies and disclaimers