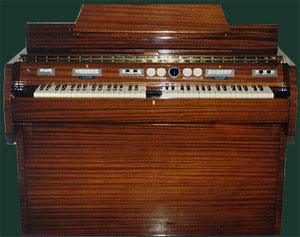 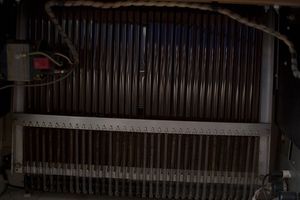 35 tapes inside the Mellotron 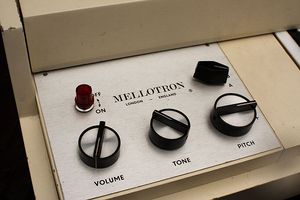 This article was initially published in Today's Engineer on April 2005

The Mellotron, an electronic keyboard device made from the 1960s to the 1980s, has been one of the most loved—and most hated—musical instruments of all time. Unlike a conventional “synthesizer,” or electronic organ, the Mellotron generates its sound from sounds recorded on 35 individual tapes. This unique arrangement allowed the instrument to imitate nearly any other musical instrument, voice, or sound imaginable.

The Mellotron was based on a 1946 invention by American inventor Henry Chamberlain. Outside, it looked like an ordinary electronic organ. Inside, however, were 35 separate tape players, each equipped with a short loop of tape. Pressing a key caused a tape “head” to touch the surface of the tape, causing whatever sound was recorded on that tape to be amplified and reproduced.

In 1962, Chamberlain’s sales manager contacted the English engineering firm Bradmatic, Ltd., to improve the basic design process. Instead, Bradmatic improved the design and reintroduced it as a new instrument called the Mellotron. Manufactured in England, the Mellotron came with a set of tapes that imitated a pipe organ. The quality of the sound was such that the instrument came to the attention of professional musicians. But musicians wanted different, often unique sounds recorded on the tapes, so the Mellotron’s makers began to offer the service of accepting custom sounds and preparing a custom “rack” of prerecorded tapes that could be installed inside the instrument’s cabinet. This made the Mellotron an extremely versatile and customizable instrument.

Although first offered as a home entertainment device, the main customers of this bulky, expensive instrument proved to be rock musicians. Early customers included the Beatles, the Rolling Stones, and Led Zeppelin. Mark Pinder, keyboards player for the band The Moody Blues, worked at the company for several months before becoming a full-time musician, and introduced the group to the Mellotron. The Moody Blues would prove to be one of the Mellotron’s best advertisers. Bradmatic, which underwent several name changes over the years, eventually lost the right to the Mellotron name in 1977 through a complex legal blunder, but continued to sell Mellotron-style keyboard instruments under the name Novachord through the mid-1980s.

Before the day of electronic “samplers,” which are devices capable of capturing and storing (usually digitally, using computer memory rather than tapes) sounds, the Mellotron was really the only way that a keyboard instrument could be made to imitate a violin, or a person singing. Unlike the electronic synthesizers of the day the Mellotron was also “polyphonic,” meaning that several keys could be played at once to produce the pleasing sound of a musical chord.

However, the Mellotron’s complex mechanical tape players were also the source of great frustration. The wheels and rollers driving the tape rack had to be regularly adjusted to prevent the tape speed from becoming erratic. Further, misalignment between the tape heads and the tapes was common, leading to poor-quality sound. For these reasons, many keyboard players abandoned the Mellotron as soon as digital samplers became available and affordable in the 1980s. More recently, however, the unique, unearthly Mellotron sound (which is difficult to imitate) has been revived, as groups such as Oasis and Radiohead, use the instrument for recordings.

Retrieved from "https://ethw.org/w/index.php?title=Mellotron&oldid=174702"
Categories:
This page was last edited on 1 April 2019, at 20:26.
About ETHW
Policies and disclaimers