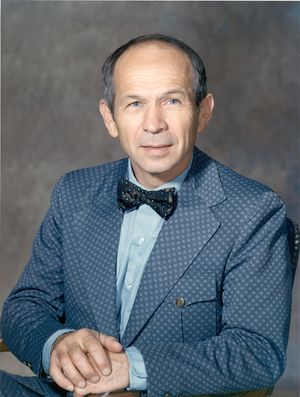 Dr. Faget was one of the small group of engineers who developed the basic concepts which led to this nation's manned space flight programs. More than any other single individual, Dr. Faget developed those original design concepts which have been incorporated into every manned spacecraft which this nation has flown or will fly. The basic configuration of the spacecraft, the control systems, heat shield, and other designs which are accepted today by everyone were either conceived by Dr. Faget or strongly influenced by his originality and imagination.

Dr. Faget was internationally known as one of this nation's leading authorities on spacecraft design and operation. As Director of Engineering and Development at the Johnson Space Center he serves as Chief Engineer and was directly responsible for the design and development of all on-board systems for all manned spacecraft. He has created a major engineering organization to carry out these responsibilities and has developed the unique facilities which are being used today and in the future to support this nation's manned flight programs.

In addition to his outstanding talents as an engineer, Dr. Faget has demonstrated a continuing interest in and a dedication to transmitting this knowledge to a new generation of spacecraft engineers. He has co-authored a book entitled, "Manned Spacecraft: Engineering Design and Operation" and has authored a book entitled, "Manned Space Flight". He has served as visiting professor to teach graduate level courses at Universities in and near Houston.

Dr. Faget was married to the former Nancy Carastro of Philadelphia and they have four children, Ann Lee, Carol jean, Guy, and Nanette.

Retrieved from "https://ethw.org/w/index.php?title=Maxime_A._Faget&oldid=172284"
Categories:
This page was last edited on 4 January 2019, at 20:40.
About ETHW
Policies and disclaimers