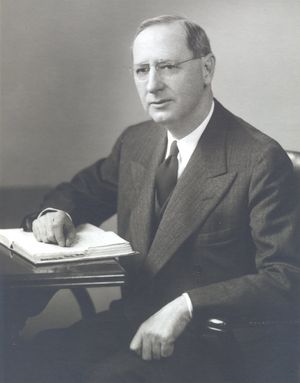 Lynde P. Wheeler '(F'28) was born in Bridgeport, Connecticut, on July 27, 1874. He received the Ph.B. degree from Yale Sheffield Scientific School in 1894 and the Ph.B. degree in 1902. He remained there until 1926 as a professor. During the Spanish-American War he served in the United States Navy, and in World War I he organized the course for Signal Corps Officer Candidates School in 1918 and he has written numerous papers on electrical and radio subjects. In 1926 Dr. Wheeler joined the scientific staff of the Naval Research Laboratory where he was Superintendent of the Consultant Division in addition to his duties in its Radio Division. During 1929 and 1930 he was with the Fleet, conducting radio experiments on aircraft carriers and in submarines. In 1935 he became a member of the Science Advisory Board and in 1936 he accepted his present position with the Federal Communications Commission as chief of the engineering department's information division. He has served on numerous Institute of Radio Engineers (IRE) Committees, its Board of Directors, and during 1943, was its President.

Retrieved from "https://ethw.org/w/index.php?title=Lynde_Wheeler&oldid=146544"
Categories:
This page was last edited on 3 February 2016, at 19:20.
About ETHW
Policies and disclaimers