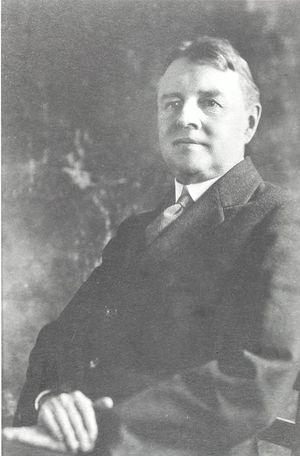 Louis W. Austin was born in Vermont in 1867 and graduated from Middlebury College in 1889. He continued his education in Germany where he received a Ph.D. from Strasbourg University in 1893. He taught physics at the University of Wisconsin from 1893 to 1901 and then returned to Germany, where he worked for two years at a laboratory in Berlin doing research on the properties of gases at high temperatures.

In 1904 Austin joined the Bureau of Standards, where he began the radio propagation studies that were to occupy him for the rest of his life. The U.S. Navy established a radio laboratory at the Bureau of Standards, and Austin headed it from 1908 to 1923. With a colleague, Louis Cohen, he developed what became known as the Austin-Cohen formula for predicting the strength of radio waves. Data collected during 1910 from Navy ships crossing the Atlantic provided the basis for the formula.

Austin joined the IRE in 1913 and served as the third president of the Institute in 1914. He was a frequent contributor to the Proceedings, publishing 40 technical papers in its pages between 1913 and 1932. He received the IRE Medal of Honor in 1927, "for his pioneer work in the quantitative measurement and correlation of factors involved in radio wave transmission." He served as a U.S. representative at numerous international conferences on radio and became director of a special radio laboratory at the Bureau of Standards in 1923.

Austin was described by colleagues as being "warm-hearted, modest, and quiet." As he entered a hospital for surgery just before his death, he wrote a note asking that his program of radio measurements be continued in the event that "things should not go well." Lyman J. Briggs who wrote an obituary of Austin for Science assured readers that his work was being continued. Austin died in Washington, D.C., in 1932.