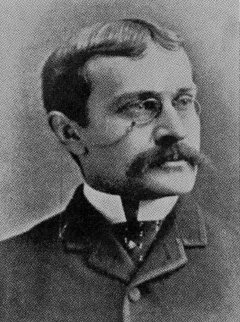 Louis Duncan, AIEE President, 1895 - 1897, served as an electrical engineering professor at Johns Hopkins University for 14 years. After retiring from his career in academia, Duncan was an engineering consultant for many traction, utility, and railway companies.

Although prominent in the educational field, Louis Duncan was best known as an electrical traction expert and consulting engineer.

Doctor Duncan was born in Washington DC, March 25, 1861, and graduated from the United States Naval Academy in 1880. For about 6 years of service after graduation, he was assigned part of the time to special duty at the John Hopkins University, to assist in determining the absolute unit of electrical resistance. For this work he received the Ph.D. degree from the university in 1885. In 1886 he resigned from the Navy and joined the teaching staff of John Hopkins, where he was in charge of a course in electrical engineering for 14 years. He inspired much original work on the part of his students.

At the same time he was occupied with various electrical engineering problems and was engineer in charge of construction of a number of electric roads in Baltimore, consulting engineer for many of the electric roads in Washington, chief engineer and in charge of construction of the Third Avenue System in New York, engineer for the Baltimore and Ohio Company, equipping the Baltimore tunnel with electric locomotives, and was a consultant for a number of other railroad and lighting concerns.

In 1899, he resigned his position at the University and devoted his entire time to his consulting practice, organizing the firm of Sprague, Duncan and Hutchinson, but in 1902 when the Massachusetts Institute of Technology built a new electrical laboratory and separated the course of electrical engineering from the physics department, he was called upon to inaugurate the course, and the idea had such an appeal to him that he accepted and donned the professorial robes again for 2 years, as head of the electrical engineering department. He then returned to his practice and was active as a consulting engineer until his death, February 13, 1916.

He took out several patents on devices for electrical machines, as well as patents on secondary batteries.

He did important consulting work for numerous utilities, including the Cincinnati Traction Company, the Indianapolis Traction Company, and many of the railroad companies in the Middle West. He was consulting engineer for the Rapid Transit Commission of New York City, chief engineer of the Keystone Telephone Company of Philadelphia, and of the independent telephone systems at Baltimore and Pittsburgh.

Doctor Duncan was the author of many articles on electrical subjects, and wrote on electricity for the Encyclopaedia Britannica. He was the chairman of the board of judges at the Philadelphia Electrical Exhibition in 1885, a member of the board at the Atlantic Exposition and the World's Columbian Exposition at Chicago in 1892, and chairman of the electrical railroad section of the St. Louis Exposition in 1904. Doctor Duncan served as Major in the first volunteer engineers' corps during the Spanish-American War.

He contributed to upbuilding of the Institute, serving 2 successive terms as president of the AIEE from 1895 to 1897, and also on several committees. He was an honorary member of the Franklin Institute, a member of the Mathematical Society of France, the Physical Society of France, the American Electrochemical Society, a Fellow of the American Philosophical Society, and others. He was associated with many other American and European scientific and technical organizations. Dr. Duncan was married and had one son and three daughters.

Retrieved from "https://ethw.org/w/index.php?title=Louis_Duncan&oldid=146532"
Categories:
This page was last edited on 3 February 2016, at 17:28.
About ETHW
Policies and disclaimers