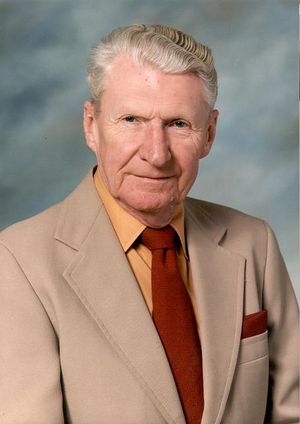 Leslie A. Geddes was born on 24 May 1921 in Scotland and educated in Canada and the U.S. He holds the B.S. and M.S. degrees in Electrical Engineering from McGill University, Montreal, Quebec; and the Ph.D. degree in Physiology from Baylor University College of Medicine, Houston, Texas. He was awarded a D.Sc. honoris causa by McGill University in 1971.

Geddes has conducted research in electromyography, cardiac output, cardiac pacing, ventricular defibrillation, and blood pressure. The properties of stimulating and recording electrodes have been a continuing interest since graduation from McGill. Among his many significant achievements is the development of the method of obtaining the electrocardiogram and respiration from chest electrodes for NASA, which is routinely used in patient monitoring today.

Several new techniques for teaching in medical education were developed by Geddes and his colleagues. He has written thirteen books and over seven hundred scientific papers, receiving the Nightingale Prize (1972) for one of the papers, and the Texas Medical Association Award (1974) for a videotape on acute myocardial infarction. He has been awarded (with others) 22 U.S. patents, 21 of which are applications of electrical engineering to medicine.

Geddes was a member of many scientific societies, including the American Physiological Society, and was a Fellow of the following: the IEEE; the American Association for the Advancement of Science; the American College of Cardiology; Australian College of Physical Scientists in Medicine; and the Royal Society of Medicine. He has received a number of awards, including: the award for leadership in biomedical engineering from the Alliance for Engineering in Medicine and Biology (1985); elected to the National Academy of Engineering (1985); the IEEE Engineering in Medicine and Biology Society Career Achievement Award (1986); the Association for the Advancement of Medical Instrumentation Laufman-Greatbatch Award (1987); the Outstanding Educator Award of the American Society for Engineering Education (1989), and the IEEE Edison Medal in 1994 "For fundamental contributions to applied biomedical instrumentation and the understanding of the electrical properties of the cardiovascular system."

In 1985, Dr. Geddes was the Rosenstadt Professor of Health Sciences at the University of Toronto. He serves as a consulting editor to numerous scientific journals and was a consultant to the National Institute of Health, the Federal Drug Administration, and the National Science Foundation. He is listed in Who's Who, Leaders in the Southwest American Men of Science, and the Royal Blue Book.

Geddes was a naturalized U.S. citizen and was married to LaNelle Nerger Geddes. He had one son, James Alexander Geddes. Geddes died in West Lafayette, Indiana, on 25 October 2009.

Retrieved from "https://ethw.org/w/index.php?title=Leslie_A._Geddes&oldid=146507"
Categories:
This page was last edited on 3 February 2016, at 16:32.
About ETHW
Policies and disclaimers