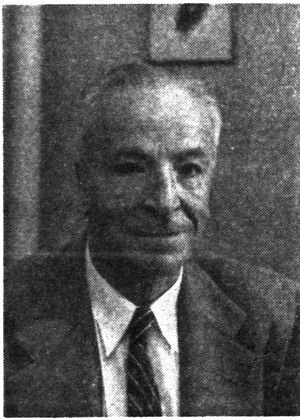 Leonid A. Umanaky (M '27, F '45, Member for Life), engineering manager, Industrial Engineering Division, General Electric Company, Schenectady, N. Y., was awarded the Edison Medal for 1955 " ... for his outstanding contribution to the electrification of industry through the application of electric machines, devices and systems to automatic process machinery; and for his inspiration, leadership, and teaching of men in this work." The Edison Medal was presented to Mr. Umansky during a special session of the AIEE Winter General Meeting, January 31, 1956, in New York, N. Y.

Mr. Umansky was born in Nikolayev, Russian Empire, (modern-day Mykolaiv, Ukraine) in 1890. He studied electrical engineering at the St. Petersburg Polytechnic Institute and graduated in 1915, during World War I. In the same year, he was sent to the United States as munitions inspector for the Russian Artillery Commission. He joined the General Electric Company in 1919 as a test engineer, after the war. In 1920, he was transferred to the power and mining engineering department, later known as the industrial engineering department, aa an application engineer. He specialized primarily in power applications in the steel industry, and in 1936 was placed in charge of engineering activities in the firm. He was made assistant manager of engineering of this department in 1950, a position he held until his retirement in 1955. As manager of engineering, he supervised the company's application engineering work in all industries. Mr. Umansky is a member of the Association of Iron and Steel Engineers. He was chairman of the AIEE Schenectady Section (1944-45). He has served on the following AIEE committees: General Industry Application and its predecessor (1941-54, Chairman 1947-54); Lamme Medal Awards (1948-51); Prize Awards for Papers (1950-53); Application to Iron and Steel Production (1936-38); Industrial Power Applications and Systems (1938-47); Industry Co-ordinating (1947-49); Standarda (1947-49); and Technical Program {1947-49).

Retrieved from "https://ethw.org/w/index.php?title=Leonid_A._Umansky&oldid=172873"
Categories:
This page was last edited on 25 January 2019, at 15:51.
About ETHW
Policies and disclaimers