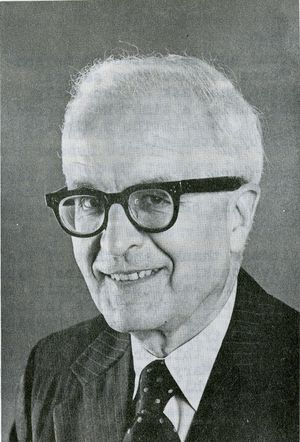 Larry Dwon was an electrical engineer who developed manpower programs to link students to the electrical power industry.

Dwon was born in New York City in 1913 to a family of Polish immigrants. He attended the prestigious Stuyvesant high school and earned a scholarship to attend Cornell University. He excelled in his study of electrical engineering and was elected to Eta Kappa Nu. Dwon would later earn an M.B.A. from New York University.

Graduating into a depressed economy, Dwon initially struggled to find work, and took positions designing electrical fans and lighting. In 1938, he switched into the power generation business, joining the American Gas and Electric Company, where he spent the bulk of his career. During World War II, he took leave from AEP to conduct classified research on radar systems at Harvard Radio Research Laboratories and Bell Telephone Laboratories. After the war, he rose to the position of Manager of Engineering Manpower, where he was charged with developing procedures for effectively utilizing engineers and technical assistants and recruiting and training employees. He became recognized for his efforts to draw engineering students into the electrical power industry, which had become a less popular destination for graduates than aerospace and computer science by the 1950s.

Dwon was devoted to service in his profession. He spent six years as an evening instructor at the Pratt Institute and the Polytechnic Institute of Brooklyn. He also wrote over one hundred technical articles and gave over two hundred talks. He was honored as an IEEE life fellow and with service awards from Eta Kappa Nu, the IEEE Power Engineering Education committee, and the Plummer Award of the American Welding Society.

Retrieved from "https://ethw.org/w/index.php?title=Larry_Dwon&oldid=167043"
Categories:
This page was last edited on 6 November 2018, at 19:23.
About ETHW
Policies and disclaimers