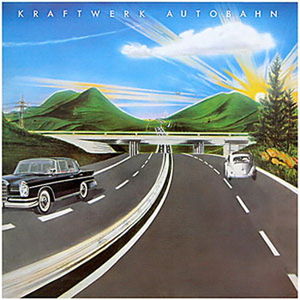 Kraftwerk is a German band that became famous in the 1970s for their use of electronic musical instruments and innovative recording techniques. While groups like the Beatles and the Beach Boys had experimented with electronic keyboard instruments and cutting-edge studio mixing and editing, Kraftwerk and bands like it built their music around the technology in many ways. In fact, they mentioned as one of their influences the philosophy of the German Bauhaus movement, which taught that technology and art should be joined together. Even the band’s name, which means “power station” in German, suggests this devotion to technology and electronic music.

The band’s best-known album from the early 1970s period was Autobahn, which featured a 20-minute long “drive” in a car down the freeway, created in the studio with electronic instruments and recording tricks. A departure from the earlier Krautrock sound of the first three albums, the music on Autobahn focused more on synthesized sounds and technology. The group’s members were photographed in costumes that made them look like engineers or scientists, or later, robots. Many of their album titles featured technological themes, such as 1975’s Radio-Activity, 1977’s Trans-Europe Express, and 1978’s Man-Machine. The melding of technology and music was carried forward in the 1981 album Computer World, which featured the song “Pocket Calculator.” By the late 1980s, however, many other groups had adopted the use of electronic instruments, and a whole category of music called synth had become popular. Kraftwerk faded away, releasing only a few more recordings before the end of the 20th century. After the release of Computer World, the band's output became far less prolific, and they released only two more studio albums (Electric Cafe, 1986, and Tour De France, 2003), as well as a remix album (The Mix, 1991) and a live album (Minimum-Maximum, 2005).

Retrieved from "https://ethw.org/w/index.php?title=Kraftwerk&oldid=154777"
Categories:
This page was last edited on 12 April 2017, at 13:52.
About ETHW
Policies and disclaimers