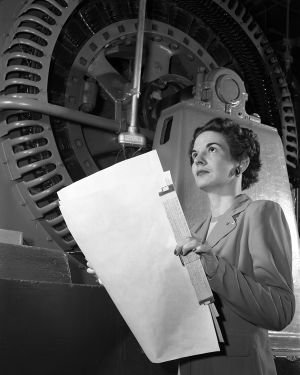 Kitty O’Brien was born on July 11th, 1916 in Charlottesville, VA. In 1935 she was accepted to Sweet Briar College, and in 1937 she enrolled in University of Virginia, where she graduated with a BSEE degree in 1939 and received the Algernon Sidney Sullivan Award. In 1939, O'Brien was hired as an electrical engineer by the NACA Memorial Langley Aeronautical Laboratory, the first woman engineer to be hired by the laboratory. She spent her entire career at NASA, and managed supersonic and subsonic wind tunnels. She was promoted to the Branch Head of the Facilities Cost Estimating Branch, Office of Engineering and Technical Services, and retired in 1971. She married Upshur T. Joyner, a physicist who was also employed at NACA/NASA Langley.

Joyner was a member of the Institute of Electrical and Electronic Engineers, and an Honorary Life Member of the Engineers Club of the Virginia Peninsula. She died on August 16th, 1993.

Retrieved from "https://ethw.org/w/index.php?title=Kitty_O%27Brien_Joyner&oldid=155243"
Categories:
This page was last edited on 2 June 2017, at 15:00.
About ETHW
Policies and disclaimers