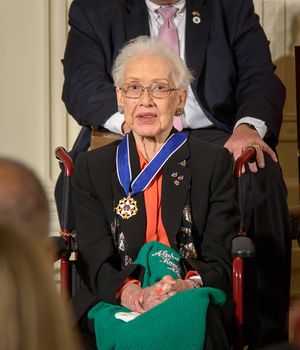 In 2015, President Barack Obama presented the Presidential Medal of Freedom to 97-year-old, Katherine Johnson for refusing “to be limited by society’s expectations of her gender and race while expanding the boundaries of humanity’s reach.” While working as a technologist for the spacecraft controls branch of NASA in 1961, she calculated the path for astronaut Alan Shepard’s Freedom 7 for America’s first human spaceflight. She would go on to later perform calculations for astronaut John Glenn’s orbit around the Earth, the first Moon landing, and the aborted Apollo 13 mission. She was also later involved in the early years of the space shuttle, and the Earth Resources satellite. 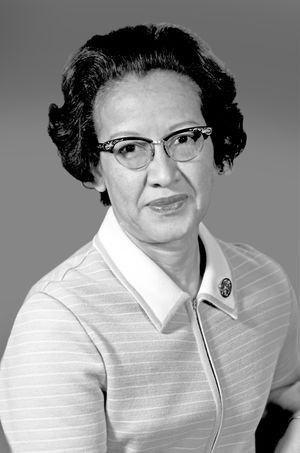 Katherine Johnson was born Creola Katherine Coleman in the town of White Sulphur Springs, West Virginia. Her father, Joshua Coleman, was also a self-taught mathematician who took on jobs as a lumberjack and farmer. Her mother, Joylette, was a teacher. Katherine Coleman was the youngest of four.

Because the county where the Colemans lived offered no secondary education for African-Americans, the Colemans rented a house near an high school that Katherine entered at the age of ten. The school was run by West Virginia State College on the outskirts of Charleston, capital of West Virginia. During holidays, she worked at the Greenbrier, a resort where her father worked and where she improved her French with the help of a Parisian chef.

In 1940, West Virginia’s governor decided to desegregate graduate schools following the Gaines vs. Canada decision of 1938. At West Virginia University in Morgantown, Globe became one of three black students, and the first black woman, to enroll in a master’s program where she studied advanced mathematics. However, she soon withdrew due to her pregnancy with the first of her three children.

In 1952, during the wedding of James Globe’s sister, James’s brother-in-law, Eric Epps, offered to find jobs for James and Katherine in Virginia. For James, this meant a job at the Newport News Naval Shipyard and for Katherine, a job at the National Advisory Committee for Aeronautics' Langley Aeronautical Laboratory. Given the increases in salaries and a chance for to use Johnson's mathematical talents, the Globes uprooted their lives and moved to Virginia. While her application to Langley was being processed, Katherine worked as a substitute math teacher at Huntington High School. 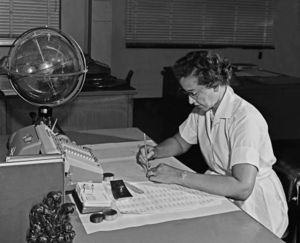 Johnson at her desk at Langley

In 1953, Globe joined Langley at the West Area Computing Unit as a “computer.” Human computers completed tables of calculations which saved on time for scientists and engineers. Two weeks into her new job, the Flight Research Division borrowed her skills. She helped calculate the aerodynamic forces on jet airplanes and demonstrated that she was an invaluable asset because of her experience with higher level mathematics. To retain her, the division gave Globe a permanent position with the Maneuvers Loads Branch and a corresponding raise. She analyzed data collected from flight tests and aircraft black boxes.

In late 1956, James Francis Globe succumbed to a tumor. Katherine Globe found herself a single mother of three. She did not falter, and she continued to pursue her dream, returning to Langley in January 1957. Despite not having any legal grounds, women were prevented from being part of editorial meetings. Undeterred and after years of pressure, in 1958 Globe finally was giving the ability to attend the editorial meetings of the Guidance and Control Branch. On 1 October that year, it would be renamed the Aerospace Mechanics Division of the NACA’s successor, National Aeronautics and Space Administration (NASA). The same year, she met James A. Johnson, a mail carrier with a military service record, whom she married in 1959.

After completing their manuscript the day after Thanksgiving in 1959, Johnson and her coauthor, engineer Ted H. Skopinski, published on September 1960, “Determination of Azimuth Angle at Burnout for placing a Satellite over a Selected Earth Position.” Johnson was the first woman to be credited in a report published by the Flight Research Division. It explained the equations describing an orbital spaceflight in which the craft’s landing position is specified. This was fundamental to Johnson’s work for the astronaut John Glenn, when, in 1962, he became the first American to orbit the Earth.

Johnson received the President’s Award at the IEEE Honors Ceremony, held on 17 May 2019 in San Diego, California, for “fundamental computational contributions to the success of America’s first and subsequent manned spaceflights, including Apollo 11.”

Katherine Johnson, the Hidden Figures Mathematician Who Got Astronaut John Glenn Into Space, The Institute, 14 Jun 2019