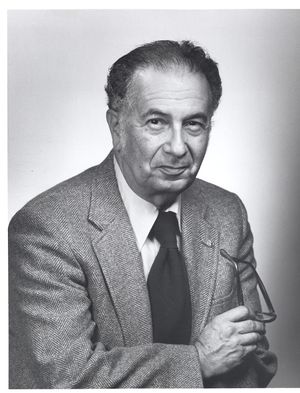 Jules Aarons, born in New York, N.Y. in 1921, received his Bachelor's degree (in education) at the City College of New York. Upon graduation in May, 1942 by dint of having taken courses in calculus and physics, he entered the Radar Training Program of the Yale-Harvard-MIT School for U.S. Army Air Corp Cadets. During World War II, he served as a Radar and Radio Officer in the Troop Carrier Command.

He interest in propagation started with designing and utilizing a receiver for Low Frequency LORAN shortly after he joined the Air Force Cambridge Field Station (now known as Air Force Geophysics Laboratory) in 1947. Studies of the earth's magnetic field, solar radio observations, and propagation programs using radio stars as beacons were his earlier interests. He received his Master's degree in Physics at Boston University, and completed his Doctorate at the University of Paris in 1954, the latter as a Fulbright Scholar.

In 1955, Dr. Aarons became Chief of the Radio Astronomy Branch at AFGL. The program of the Radio Astronomy Branch (which later became the Trans-Ionospheric Propagation Branch) used point sources on the sun and radio stars as rapid beacons to study lower and upper atmosphere irregularities before satellites came into the picture. With the advent of satellites his research centered on ionospheric irregularities at high and equatorial latitudes. He, with his group, set up the solar radio global network of observations .

He has been associated with AGARD (NATO Advisory Group on Aeronautical Research and Development) for over 15 years, most recently as Chairman of the Electromagnetic Wave Propagation Panel.

Dr. Aarons effectively retired from government service on September 30, 1981, when he joined Boston University's Department of Astronomy as Research Professor of Astronomy and Space Physics.

While at AFGL he received the Loeser Award for Scientific Achievement in 1964, and in 1969 the U.S. Air Force Exceptional Civilian Service Award. CCNY awarded him the Townsend Harris Medal in 1967.

Dr. Aarons is the author or co-author of over 100 Journal articles, and the editor of books on Solar Radio Astronomy and on Radio Astronomical and Satellite Studies of the Atmosphere. He is a Fellow of the IEEE and a member of the American Geophysical Union. He is an International Vice-Chairman of Commission G of URSI.

Over the years he has taken advantage of his global studies to pursue his interest in photography. He has photographs in the collections of the Museum of Modern Art (New York), the Bibliotheque Nationale (Paris), and has had one-man photographic shows at galleries in Boston, New York, Paris, and the George Eastman House in Rochester, New York.

He and his wife, Jeanette, have two children: Philip, in public administration in New York City, and Herbert who is in farm management in California.