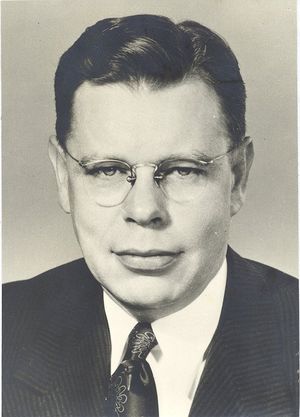 J. W. McRae was born on October 25, 1910, in Vancouver, British Columbia. He received the B.S. degree in electrical engineering from the University of British Columbia in 1933, and the M.S. and Ph.D. degrees from the California Institute of Technology in 1934 and 1937.

Dr. McRae joined the Bell Telephone Laboratories, Inc., in 1937, where he engaged in research on transoceanic radio transmitters and later worked on a microwave oscillator for National Defense Research Council.

During World War II, Dr. McRae was commissioned a major in the United States Signal Corps, assigned to the Office of the Chief Signal Officer in. Washington, D. C. After working on development programs for airborne radar equipment and radar countermeasures devices, he transferred to the Signal Corps Engineering Laboratories at Bradley Beach, N. J., as chief of the engineering staff. There, he became deputy director of the division and attained the rank of colonel, before returning to civilian life and the Bell Telephone Laboratories in 1945.

Dr. McRae joined the Institute of Radio Engineers in 1931, as an Associate and became an IRE Fellow in 1947. In addition to serving on various IRE Committees, he has been the Chairman of the New York IRE Section, has been a member of the IRE Board of Directors, and he has served on the IRE Board of Editors since 1946. McRae was IRE president in 1953.