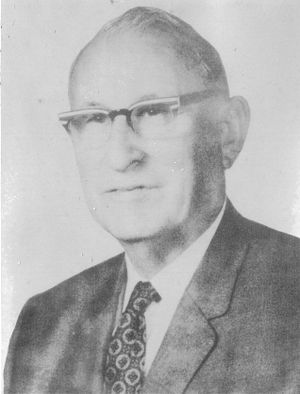 James Ashburn Rawls was born on March 22, 1905, in Holland, Virginia. He is a 1926 graduate of the Virginia Polytechnic Institute, with a BS degree in electrical engineering. He also completed several night courses at the T. C. Williams Law School. After graduation he joined the Virginia Electric and Power Company as Assistant Engineer at Suffolk, Virginia. In 1927 he was appointed Assistant Superintendent of Distribution and in 1928 he was transferred to Norfolk as Assistant to the Vice President. He later was transferred to Richmond as Assistant Engineer. From the time he joined the company, through the present, Mr. Rawls has been known as an innovator.

It was during his early years with Vepco that he and present Chairman of the Board of Directors, Erwin H. Will, arranged to purchase the first creosoted poles against the advice of several company officials.

As the use of electricity multiplied, Mr. Rawls was one of the first to insist on the need for higher voltage. Beginning his quest in the early years when 2400 volt lines were the rule, Mr. Rawls culminated his campaign for higher voltage in 1966 when one of his projects, the first 500,000 transmission system in the free world was put into operation by Vepco. For this pioneering effort, Vepco won the Edison Award.

A man who has always believed that problems were for solving. Mr. Rawls has been successful in finding solutions and answers to questions which other engineers would have given up. As a result of his devotion to both Vepco and his profession, he has served as an inspiration for many people who have had the good fortune to be associated with him.

Mr. Rawls, a Fellow of the Institute of Electrical and Electronics Engineers, was Vice Chairman and Chairman of its Transmission and Distribution Committee, and has held various other positions in the IEEE. He is a member of the International Congress on Large Electric System (CIGRE), and is a member of its U. S. National Committee and U. S. Representative on International Study Committee No. 22 on Overhead Lines.

In private life Rawls showed the same zealous talent for professionalism that he shows on the job. His many hobbies, which include reforestation, antiques, woodworking and collecting and rebuilding old lamps, reflect his talents. His home, which he designed, is a showplace in the Richmond area and has been featured in local publications. The home contains a magnificent collection of antiques, many of which he rebui1t or refinished himself, and is designed with a number of rooms paneled in a variety of woods cut from trees grown by Mr. Rawls on his property.

Mr. Rawls was a member of the First Congregational Christian Church, where he is a member of the Board of Deacons, Board of Trustees and Official Board. He was church treasurer for 16 years. He also is a past vice president of the Bellevue Civic Association.

Mr. Rawls was married to the former Leila Heffington, and they had two children, James A. Jr., who was with the Virginia Division of Motor Vehicles, and Walter Joyner, a graduate student who was working on his PHD in Civil Engineering at Georgia Tech.

Retrieved from "https://ethw.org/w/index.php?title=James_A._Rawls&oldid=171966"
Categories:
This page was last edited on 20 December 2018, at 17:06.
About ETHW
Policies and disclaimers