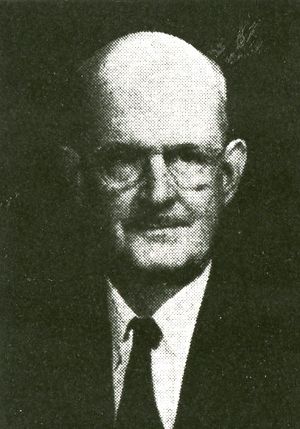 John Calvert was born in Columbia, Mo., on October 14, 1898 After service in the U. S. Infantry during 1916-19, he completed work for a B.S. degree in E.E. at Missouri. Later he received his M.S. degree in E.E. and a Ph.D. in mathematics from the University of Pittsburgh. He was a design and development engineer for 12 years with the Westinghouse Electric Corporation on large a-c machinery, and served part time as a graduate lecturer at the University of Pittsburgh. For 2 years. he was an associate professor at Iowa State College, and for 16 years he was chairman of electrical engineering at Northwestern University, before going to the department head of electrical engineering at the University of Pittsburgh in 1954. His research and publications were concerned with calorimeter tests on rotating machinery, magnetic fields, iron losses, short-circuit forces, ventilation, insulation, lightning protection, armature windings, and ship propulsion; more recently publications relate to special-purpose analog computer designs, economic models, loss minimization in utility systems, and special types of open and closed-loop control systems. He was on loan, 1941-42, to the Naval Ordnance Laboratory for the design of, and to represent that organization on the construction of the Pacific Magnetic Proving Ground in Pearl Harbor. He conducted research for the Bureau of Aeronautics, 1944-54, on measurements and computations related to aerial warfare.

The 1958 AIEE Medal in Electrical Engineering Education was presented to Dr. J. F. Calvert (F '45) head of the the department of electrical engineering at the University of Pittsburgh, during the Fall General Meeting of the Institute, held in Pittsburgh, Pa.

Dr. Calvert has been awarded the medal "...in recognition of his distinguished service as a teacher of electrical engineering and as evidence of the high esteem in which his contributions to engineering education are held by his fellow members of the American Institute of Electrical Engineers."

Retrieved from "https://ethw.org/w/index.php?title=John_F._Calvert&oldid=173852"
Categories:
This page was last edited on 15 February 2019, at 20:26.
About ETHW
Policies and disclaimers