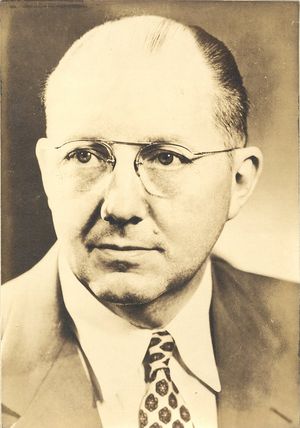 Ivan S. Coggeshall's association with IRE began as Associate in 1926 during the broadcast boom. His national committee chairmanships included Membership, New York Program, Papers Procurement, Public Relations, and Constitution & Laws. His years on the Board of Directors and Executive Committee coincided with World War II and the exciting mid-Century years of television. He was President in 1951. His other committee memberships embraced Admissions, Annual Review, IRE/RTMA Co-ordination, JTAC, History, Papers, Papers Review, Professional Technical Groups, Founders Award, Finance, Nominations, and Sections. In 1942 he was appointed by the Board to help organize the first New York Section IRE; he was vice-chairman of the Building Fund in 1945 and the National Convention of 1948.

In 1930 Mr. Coggeshall joined AlEE as an Associate Member to become secretary (later, chairman) of the fledgling Communication Division of the New York Section. Subsequently he was chairman of the Telegraph Systems Committee, the Communication Division, and the Board of Examiners. A member of nine other committees, he was vice-chairman of Automation & Data Processing, Committee on Communication, and the Technical Operations Department. In 1960 he joined the AlEE staff professionally as Manager Technical Operations; as such, in 1962, he assisted Executive Secretaries Nelson Hibshman and George Bailey in the details of AIEE-lRE merger.

In IEEE he served on the Technical Activities Board and Internal Communications and History committees and Life Member Fund. He was chairman of the Council of Communication Area Groups in 1964-1965, and voluntary Editor of IEEE's administrative newsletter "Electrical Engineering", 1966-72. To the Institute he has contributed 8 technical and 12 historical papers.

Born Sept. 30, 1896, Ivan Stoddard Coggeshall was a wireless amateur in Newport, R.I., in 1908-1914. As a professional telegrapher he joined AIEE's student branch when he entered Worcester Polytechnic Institute. Thus was begun a lifelong interest in the integration and end-on operation of landline telegraphs, undersea cables, and overseas radio circuits, recognized in an honorary doctorate from his alma mater and in 1963 the IEEE Communication Systems Group's achievement award. A veteran of both World Wars and a 1942-1948 U.S. Navy consultant on cables and radio, he retired from the Navy as Commander, and from the Western Union Telegraph Company in 1959 as assistant vice president. With his wife, Ada Louise Crowe of Boston, he retired "back home" in Middletown, R.I., with his treasures: family, friends, books, turntable, palette, camera, correspondence, and a fanfold of paid-up membership cards.

Mr. Coggeshall was awarded the 1978 IEEE Haraden Pratt Award. His citation read: 'In recognition of Ivan S.Coggeshall's dedicated contribution over a span of fifty years to the engineering profession through his service to the Institute of Radio Engineers and the Institute of Electrical and Electronics Engineers and his leadership in integration of wire and radio media through his wise counsel and action as Officer and Staff member of technical and professional organizations, the Board of Directors confers this Award.'

Retrieved from "https://ethw.org/w/index.php?title=Ivan_S._Coggeshall&oldid=155330"
Categories:
This page was last edited on 9 June 2017, at 14:01.
About ETHW
Policies and disclaimers