In 1889, electrical appliances began to hit the market and revolutionized the way people kept house. This impacted the everyday lives of women, expected to devote themselves to household management. 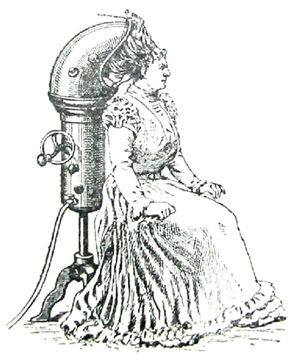 Due to its compact size and light weight, Nikola Tesla's AC (alternating current) motor held great commercial potential. One of the first appliances to be fitted with an electric motor was a three-blade fan introduced by the Westinghouse Company in 1889. Other electric appliances rapidly followed. The electric hair dryer which uses a fan powered by an electric motor to drive air over a heating element also arrived in 1889. The classic pistol-shaped, hand-held model was introduced in 1914; except for the introduction of lightweight plastic materials, has changed little. 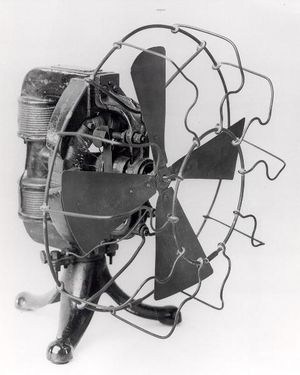 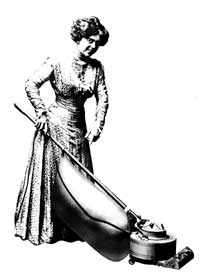 The 1908 Hoover Model O. It weighed 40 pounds (25 of which were the weight of the motor), but was lightweight compared to the 100 pound pushcart models available at the time. Courtesy: The Hoover Company.

The electric vacuum cleaner came in 1901. Designed by a British engineer, the first model was called a Puffing Billy. It consisted of a large electric motor, fan, and dust-collecting box on a pushcart. The cart stayed outside the building that was being cleaned and long hoses were fed through doors or windows to collect dust. The first commercially successful upright, hand-held vacuum cleaner, the Hoover Model O, was developed in 1908.

Electric washing machines came along in 1909. Though steam-driven washing machines had been in existence for some time, they were not efficient for common household use prior to the introduction of the electric motor.

Another appliance that dramatically changed household chores, again because of the invention of Tesla’s small electric motor, was the electric mixer, first introduced in 1904. Sunbeam released the Mixmaster in 1930 and is among the most popular electric mixers ever produced. 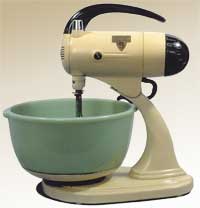 This 1930s Sunbeam mixer was one of the many electrical appliances introduced in the first half of the 20th century that changed the way households were run. Courtesy: Sunbeam Corporation.

Electric appliances unquestionably made life easier and more comfortable for people. However, for that segment of the population most charged with administering to household chores, women, they proved a double-edged sword. One of the most revolutionary implications of the wide-scale introduction of electric appliances was that, due to their capacity for saving labor time, they freed women to move into the private work force as never before, a move generally recognized as a great step forward for women’s liberation. However, social conventions being what they were, the reality was that when women returned home from work, the household chores awaited them, effectively making their daily labor time even longer.

Retrieved from "https://ethw.org/w/index.php?title=Household_Appliances_and_Women%27s_Work&oldid=120072"
Categories:
This page was last edited on 15 September 2015, at 17:43.
About ETHW
Policies and disclaimers