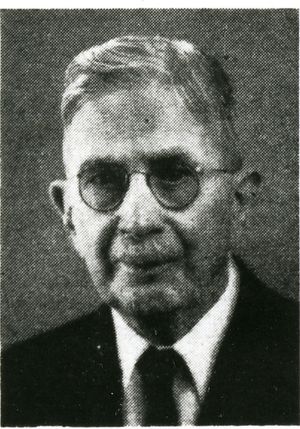 Herbert B. Brooks was born January 25, 1869 in New Bremen, Ohio. At age 17, he was apprenticed to the Piqua (Ohio) Edison Electric Company, whose plant was the fifth Edison "central station" in the United States. In his second year, the company sent him to the Edison Machine Works at Schenectady, NY, where was soon placed on the payroll of a member of the test room staff. He was loaned for several weeks to the parent company, the Edison Electric Light Company of New York City, where his work included operating Edison isolated plants and troubleshooting. In the following autumn, at age 18, he was called back to Piqua and promoted from apprentice to superintendent and electrician. After 11 years in this position, he resigned to study electrical engineering at Ohio State University. At the beginning of his third year he was appointed student assistant in physics. After two years, he left this position to become student assistant in electrical engineering. He graduated in 1903, and at once entered the recently established U.S. National Bureau of Standards in Washington, DC. This proved to be the field for which all his previous years had been the preparation. In 1906, he became the first chief of the Electrical Instrument Section.

In 1911, Dr. Brooks was loaned to the Bureau of Foreign and Domestic Commerce. As a commercial agent of this Bureau, he visited 31 leading foreign makers of electrical instruments and integrating meters. The results of this study were published in 1913 by the Government Printing Office as Special Agents Series No. 66, "Electrical Instruments and Meters in Europe".

As a member of the AIEE Committee on Instruments and Measurements, he felt very strongly that there should be American standards for electrical measuring instruments. After five years of advocating the establishment of such standards, he wa allowed to prepare a tentative draft for comment and criticism. This work culminated in the establishment of American Standard C39.1 for Electrical Measuring Instruments.

His best-known inventions are the deflection potentiometer, a variable sel and mutual inductor - the inductometer, and the standard-cell comparator. He continued to work in his basement and laboratory. In retirement, he has published two papers, "Electrical Indicating Instruments used in Early Edison Central Stations", and "Inductive Efficiency of Reactive Coils".

Dr. Brooks received his Ph.D. from Johns Hopkins University in 1926. He was awarded the Lamme Medal, Ohio State University, in 1948.