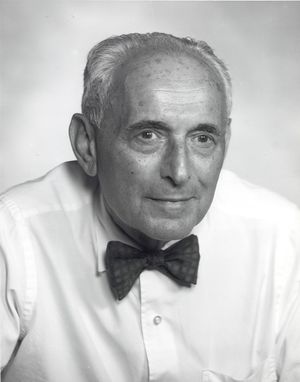 Henry P. Kalmus is a native of Vienna, Austria, and received his degree in electrical engineering from the Technical University in Vienna. From 1930 to 1938, he worked for the Orion Radio Corporation in Budapest, Hungary. He then came to this country and worked for the Emerson Radio Corporation until 1941 when he joined the Zenith Radio Corporation in Chicago, Illinois. He joined the staff of the National Bureau of Standards in 1948, and became a member of the Diamond Ordnance Fuze Laboratories (now the Harry Diamond Laboratories) upon its creation from elements of the National Bureau of Standards in 1953. After resuming his graduate studies, he received his Doctorate in Physics from the University in Vienna in 1960, and served as Associate Technical Director and Chief Scientist for the Harry Diamond Laboratories until his mandatory retirement in 1975.

Dr. Kalmus' numerous publications and over 50 patents are testaments to his many valuable achievements and innovative contributions to both Government and industry. His wide-ranging patents include a radar system which can discriminate between approaching and receding targets, a liquid level gauge which is very versatile and reliable, a non-intrusive flow meter with fast response and great accuracy, a gravity meter in which the force of gravity is compared to centrifugal force rather than a spring force, several electronic fuzing systems for ordnance which are resistant to counter-measures and microphonics, and a photometer in which a photo tube is modulated by a magnetic field to eliminate mechanical shutters.

Among his other interests, Dr. Kalmus played chess, and he has enjoyed skiing and mountain climbing both in this country and in his native Austria; however, he had the greatest satisfaction from his home laboratory, and from posing challenging problems and paradoxes to his colleagues and junior associates - and then offering simple, elegant, and enlightening solutions. He was retained as a consultant by the Harry Diamond Laboratories.