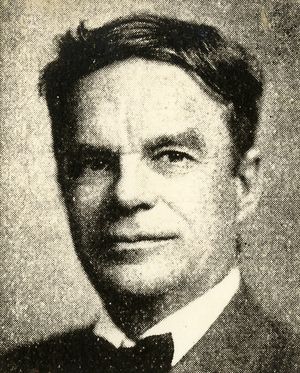 Henry E. Warren was born in Boston on May 21, 1872 and graduated from the Massachusetts Institute of Technology with a B.S. in 1894. From 1897 to 1902 he served as electrical and mechanical engineer of the Saginaw Valley Traction Company in Saginaw, MI. Retuning to Boston in 1902, he became engineer and general superintendent of the Lombard Governor Company, which position he held for the next 16 years. In 1904, the factory was moved from Boston to Ashland, MA. While associated with this company he made improvements in the design of hydraulic speed governors which were installed in many of the largest water power plants of the United States. During the World War he designed several types of hydraulically operated machines which were used in the production of heavy shells and he also developed a new type of fire control mechanism.

In 1907 Mr. Warren settled in a farm in the town of Ashland. Here he spent considerable time and thought in the designing and constructing various forms of electrical clocks as an avocation. One of the farm buildings was converted into a workshop and after several years of experimenting the Warren Clock Company was organized in 1912 to build and sell battery operated clocks. Not satisfied with the product, he undertook in 1916 the problem of utilizing commercial a-c for the purpose of time-keeping. This involved first the invention of a new form of self-starting synchronous motor which would be adaptable for use in clocks under conditions quite different from those to which ordinary power motors are subjected; and second, the development of an instrument for measuring frequency with great precision, which later became known as a Warren Master Clock. Then it was necessary to persuade engineers of power companies to use this instrument so that the frequency of a-c might be controlled with sufficient accuracy. These objectives were reached before the end of 1916, when the Edison Electric Illuminating Company of Boston adopted the new method of frequency regulation by means of the first Warren Master Clock. Other companies soon recognized the merits of the idea and within 10 years the use of regulated a-c as a new kind of time service became general. As a result, the proportion of electric clocks to all clocks exclusive of alarm clocks produced and sold annually has risen from less than 2 percent in 1916 to more than 60 percent in 1933.

Mr. Warren was also engaged in adapting time-keeping synchronous motors to many fields of usefulness and in providing improved devices for frequency control. More than 100 patents were granted to him in his lifetime. Mr. Warren spent his late career as president of the Warren Telechron Company and consulting engineer for the General Electric Company. In 1934 he was awarded the Lamme Medal of the American Institute of Electrical Engineers (AIEE, now IEEE) for his “outstanding contributions to the development of electrical clocks and means of controlling central station frequencies.”

Retrieved from "https://ethw.org/w/index.php?title=Henry_E._Warren&oldid=173771"
Categories:
This page was last edited on 15 February 2019, at 16:58.
About ETHW
Policies and disclaimers