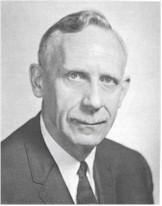 Hendrik Wade Bode was born 24 December 1905, in Madison, Wisconsin. He attended High School in Urbana, Illinois, and Normal School in Tempe, Arizona. Continuing his education, he received his B.A. Degree in 1924 from Ohio State University and his M.A. Degree from the same institution in 1926. During this time, he was a teaching assistant for one year. Coming immediately to Bell Telephone Laboratories, he began his career with electric filter and equalizer design. Three years later, in 1929, he transferred to the Mathematical Research Group, where he specialized in research pertaining to electrical networks theory and to its application to long distance communication facilities. While employed at Bell Laboratories, he attended Columbia University Graduate School, and received the Ph.D. Degree in 1935.

With the outbreak of World War II, Bode turned to the development of electronic fire control devices, and, in recognition of his contributions in this field, he was awarded the Presidential Certificate of Merit (in 1948) for his work in the field of fire control under the NDRC of the OSRD.

Bode's work in electric filters and equalizers led to broader aspects of communication transmission, resulting in the publication in 1945 of his book Network Analysis and Feedback Amplifier Design, which is considered a classic in its field. He has been granted 25 patents in electrical engineering and systems design, including patents for transmission networks, transformer systems, electrical wave amplification, broadband amplifiers, and artillery computing.

Following World War II, he worked in part on military problems, including those in missile systems, and in part on modern communication theory. He has been involved in the work of a number of government committees, and has written many scientific and technical articles for publication.

In 1944, Bode was placed in charge of the Mathematics Research Group at Bell Laboratories, and in 1952 became Director of Mathematical Research. In 1955 he was appointed Director of Research in the Physical Sciences, and in 1958 assumed the responsibilities of Vice-President in charge of one of two vice-presidential areas devoted to military development.

Bode retired from Bell Telephone Laboratories in October 1967, at the age of 61, after 41 years service in a distinguished career. He was immediately elected Gordon McKay Professor of Systems Engineering at Harvard University. In his new career, Bode is teaching and directing graduate student research, and conducting a seminar on the planning and conducting of engineering and development programs. He is collecting information on military projects particularly with respect to research in areas where there are difficulties concerned with decision making, and is also studying the relationship of technology to social problems.

Bode is a member or fellow of a number of scientific and engineering societies, including Fellow, IEEE; Fellow, American Physical Society; Member, American Mathematical Society; Member, Society for Industrial and Applied Mathematics; and Fellow, American Academy of Arts and Sciences. He has also achieved further distinction by being elected to the National Academy of Sciences, and the National Academy of Engineering. He was awarded the 1969 IEEE Edison Medal "For fundamental contributions to the arts of communication, computation, and control; for leadership in bringing mathematical science to bear on engineering problems; and for guidance and creative counsel in systems engineering."

While Bode's chief interests have been science and engineering, be has found time to pursue two major hobbies. One of these is reading, in which he is known as an avid reader on a wide variety of subjects. And, as frequently happens, persons from the Middle West and Southwestern parts of the United States develop an interest in boating when they come to the Eastern coast. Bode engaged in sail-boating on Long Island Sound during his early career in the New York area, and after World War II, he acquired a converted LCT, which he operated on the upper reaches of the Chesapeake Bay adjacent to the Eastern Shore of Maryland. He is also a "do-it-your-selfer," interested particularly in gardening around his home. Bode's wife is the former Barbara Poore. They have two children, Katherine Anne Bode and Beatrice Anne Hathaway Bode.

Retrieved from "https://ethw.org/w/index.php?title=Hendrik_W._Bode&oldid=146041"
Categories:
This page was last edited on 27 January 2016, at 19:58.
About ETHW
Policies and disclaimers