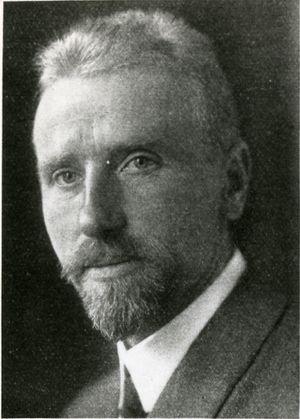 Heinrich Barkhausen was a German physicist and electrical engineer who discovered the Barkhausen effect, which demonstrated the existence of magnetic domains.

Heinrich was born in Bremen, Germany, in 1881. His father was a district judge. He attended the Gymnasium in Bremen and worked briefly as an engineering trainee for a railway maintenance depot before enrolling in Bremen’s engineering college. He then studied physics at the universities of Munich, Berlin and Göttenberg. He received his doctorate in 1907 from Göttenberg on “The Problem of the Generation of Oscillations” and was subsequently hired as researcher at the Siemens & Halske laboratories in Berlin.

In 1911, Dresden’s Technische Hochschule nominated Barkhausen to the first known professorship in the communications branch of electrical engineering. In this role, he performed breakthrough research in theories of nonlinear switching elements and of spontaneous oscillation. He also developed electron-tube coefficients and their related equations and wrote a standard four-volume text on electron tubes. With Karl Kurz, he created the Barkhausen-Kurz oscillator, an electron tube that could produce continuous-wave oscillation at ultra-high frequencies.

In 1919, he discovered the Barkhausen effect. He found that when he magnetized ferromagnetic material, like iron, he could hear acoustical disruptions in a loudspeaker attached to a coil of wire around the iron. These jumps were caused by the movement of magnetic domains in the iron.

He founded the Institute of High-Frequency and Electron-Tube Technology in Dresden. It was destroyed by fire-bombing during World War II, and Barkhausen helped rebuild the facility after the war.

Among his many honors, Barkhausen received the Morris Liebmann Memorial Prize in 1933 from the Institute of Radio Engineers.