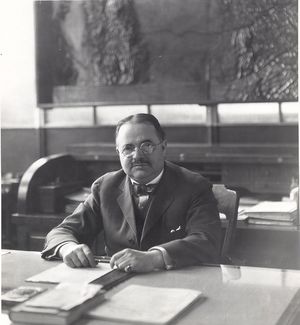 Giuseppe Faccioli was born at Rome, Italy, April 7, 1877. Graduating from the University of Milano in 1899 with the highest scholarship, he was engaged for one year in the electrification of a locomotive factory, spent one year in the testing room and in charge of the design of induction motors and alternators for the Tenomasio Brown Boveri of Milano, was engaged as a consulting engineer for one year, and then in 1902 came to the United States.

Between 1902 and 1906 he had a varied experience, being with the Interborough Rapid Transit Company, New York, the Crocker-Wheeler Company, and an assistant to William Stanley at Great Barrington, Mass. In 1906 he began his long term of service with the General Electric Company. He continued at the Great Barrington laboratory until 1908, when he was transferred to the railway department at Schenectady, later the same year being transferred to the transformer department, and in 1911 appointed assistant engineer of the transformer department. Later he was transferred to the Pittsfield works, and in 1913 was appointed work's engineer of this plant.

In 1927 he also became associate manager, retiring in 1930. For his contributions to the development and standardization of high-voltage oil-filled bushings, capacitors, lightning arresters, and numerous other features in high-voltage transformers and power transmission, Giuseppe Faccioli was presented the 1931 Lamme Medal of the AIEE.

Retrieved from "https://ethw.org/w/index.php?title=Giuseppe_Faccioli&oldid=173435"
Categories:
This page was last edited on 11 February 2019, at 17:04.
About ETHW
Policies and disclaimers