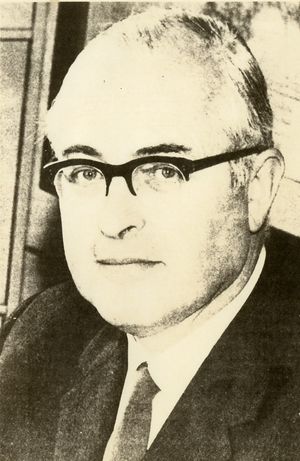 G. W. A. Dummer was born in 1909 in Yorkshire, England, and was educated at Manchester College of Technology. He joined the Mullard Radio Valve Company in 1931, working on valve testing and fault diagnosis. In 1935 he joined A.C. Cossor Ltd., working on cathode-ray tubes, time bases and circuits, and in 1938 moved to Salford Electrical Instruments high-frequency laboratories. In 1939 he joined the group working on time bases at the Royal Signals and Radar Establishment where, with a colleague, he made the world's first working PPI.

In 1942 he became Head of a Radar Synthetic Trainer Group and was responsible during the next three and a half years for the design, manufacture and installation of over seventy types of radar training equipments for military use, with an estimated saving to the UK of many millions of pounds. In 1943 he visited the U.S.A. to help M.I.T. Radiation Laboratories set up a similar Trainer Design Group. For this work he was awarded the M.B.E. in 1946 and also the American Medal of Freedom (with Bronze Palm) by the U.S. Government.

In 1944 he began research and development on components and constructional techniques for radar equipment and from 1945 was a member of many government and NA TO committees placing contracts with ind us try, universities and research associations for new components and materials.

He initiated research on new components and techniques and holds a unique record in that he has presented five technical papers at the Electronic Components Conference in the U.S.A. in 1952, 1958, 1960, 1962 and 1964. He is the author or co-author of the "Radio and Electronic Components" Series of books published in 1956, and subsequently. He has written sixty-five technical articles and his books on "Components", "Reliability" and "Microelectronics" have been translated into many languages, including Russian and Japanese.

He predicted the possibility of reducing transistor components into one solid block and put forward this concept at the USA Components Conference in 1952.

In the early 1960's he initiated the majority of Government Research on thick and thin film circuits and on semiconductor integrated circuits. He was awarded the "Wakefield" Gold Medal by the Royal Aeronautical Society for this work in 1964.

He retired in 1966 as Superintendent Applied Physics to become a full-time author. He was a Fellow of the IEEE, the IEE and the IERE. He and his wife , Dorothy, live in Malvern and play bridge most weekends. Their son, Stephen, is a Sea Captain in Mombasa.

Retrieved from "https://ethw.org/w/index.php?title=Geoffrey_W._A._Dummer&oldid=166451"
Categories:
This page was last edited on 28 September 2018, at 15:10.
About ETHW
Policies and disclaimers