The major IEEE boards and committees meet three times a year at the “meetings series,” also referred to as the “OU series.” These meetings typically take place in February, June and November, from a mid-month Wednesday to the following Monday. TAB meets all day Friday and Saturday morning, the Board of Directors meets Sunday and Monday, PRAC[1] meets on Wednesday and Thursday, etc. The presentations at these meetings include overviews of IEEE’s major operations.

I usually download the presentations that interest me the most. Over the years, I have collected quite a few that now have historical significance. (With hindsight, someone should have been collecting these overviews in a systematic way because they contain important parts of IEEE history.)

Below are the presentations of historical significance which I have collected including a few of my comments on each. 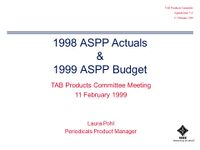 1999 Overview of the All-Society Periodicals Package

1999 Overview of the All-Society Periodicals Package

This overview is the oldest I could find. Periodicals and conferences were IEEE’s most important revenue sources at the time (as they still are at the time of this writing, in 2021). The All-Society Periodicals Package (ASPP) was the most significant single product IEEE sold at the time. Revenues from non-member subscriptions amounted to a comparable amount. 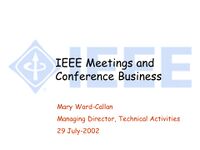 2002 Overview of the Meetings and Conferences Business

2002 Overview of the Meetings and Conferences Business 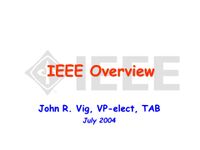 This had been my “master slide deck” during my years as TAB VP-elect and TAB VP. During those two years, I had been asked to talk to groups about a variety of topics. The master deck made it easy for me to prepare a talk about almost any IEEE topic just by selecting an appropriate subset of these slides.

I had “borrowed” many of these slides from various IEEE volunteer and staff leaders, as noted on the title slides.

Slides 7-24: Membership statistics, 1963 to 2003, including comparisons with other professional societies.

Slide 24: An important implication of this slide is that, while 70% of members hold an EE degree, 30% do not; i.e., that nearly 100K members are not EEs! The 1997 Board of Directors recognized the significance of this when it passed a resolution that the name of the organization shall be just the four letters, I-E-E-E, and only when it is legally required shall the full name, Institute of…, be used.

See: What's in a Name - Use of the Letters I-E-E-E vs. The Institute of Electrical and Electronics Engineers

Slide 27: Important membership statistics; e.g., that 55% of members work for corporations and only 17% work in academia. (The % of academics among IEEE’s leaders was probably greater than 17%.) That only 8% of members were women was also highlighted.

Slide 60 shows the growth of society and council sponsored conferences from 1990 (186 conferences) to 2003 (325 conferences), including that 5 conferences had been canceled in 2003 due to the SARS virus.

Slides 72 to 79 show sales and marketing information, including the expenses.

Slide 73 shows that sales more than doubled between 1999 and 2004 mostly due to the growth of the sales of the IEEE Electronic Library (IEL).

Slides 74 to 77 show the sales and marketing expenses. 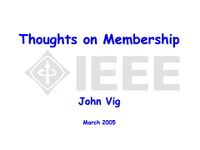 These slides show lots of membership statistics, mostly as of 2004.

Slides 4–5: Membership is shrinking in the USA; growing outside. 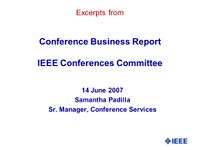 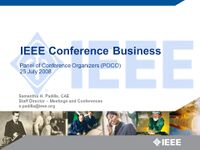 Slide 4 shows the rapid growth in the numbers of technically cosponsored (TCS) conferences, especially by the geographic units – which grew from 8 in 2003 to 61 in 2007. (The OUs had discovered that there was money to be made from the revenue distribution to TCS conference papers.) By 2018 there were 979 TCS conferences.

Slide 7 shows that, while a few conferences were large, most had under 300 attendees.

Slide 8 shows that most of the surpluses were generated by conferences in the USA. 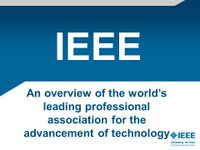 These were the master slides I used during my year as IEEE President; i.e., I selected subsets of these slides when I was asked to address particular topics in a speech, or when I was asked questions.

Noteworthy is the “Mean sub-to-epub” on slide 46. It was 50.9 weeks at the time; way too long. Authors don’t want to have the publication of their paper delayed a year. Efforts to reduce this time are documented in the History of IEEE Since 1984, https://ethw.org/History_of_IEEE_Since_1984 The solution was to “periodically calculate the submission-to-publication statistics and distribute the results, each quarter, to TAB, the editors-in-chief and other editors, the IEEE publications staff and volunteers, and to boards and AdComs of the Societies and Councils. Soon after the reports started, publishing delays began to drop.

By 2010, the median delay among all IEEE journals was forty weeks, and only two journals had delays more than two years. By early 2011, the median “sub-to-pub” delays had dropped to thirty-two weeks,” and by early 2021, the median was 18 weeks. Peer pressure worked!

The Transnational Scorecard, slide 25, was a document Marc Apter and I had created in 2004 while he and I were VPs of RAB (later, MGA) and TAB, respectively. It was intended to show deficiencies in the degree to which key positions in IEEE were representative of the membership. For example, while 45% of the members resided outside the USA at the time, only 21% of the Board of Directors did (although, if counted by country of birth, the percent from outside the USA would have been significantly higher – e.g., I would have been counted as having been from outside the USA.) Comparing the 2004 Scorecard with the 2019 Scorecard shows that IEEE had become a great deal more transnational by 2019, although, there was still room for improvement.

If we were to extend this to the number of those who are engaged with IEEE in some way, the largest group would be those who visit IEEE Xplore each year. According to the person in charge of Xplore, Prakash Bellur, Senior Director, Platform Management, the numbers of unique visitors to Xplore per year ranged from 32 million in 2016 to 55 million in 2020 (while we have about 420,000 members as of this writing, in 2021). 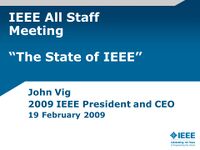 2009 The State of IEEE, All-staff meeting in Piscataway – J Vig

2009 The State of IEEE, All-staff meeting in Piscataway

I presented an overview of IEEE operations; publications, conferences, and membership, to the Piscataway workforce. Under publications, in slide 12, I spoke of open access being a trend that will profoundly affect IEEE in the future. I also spoke of the threats to our conferences business (slide 14) and, I emphasized that, between those threats and open access, we needed new revenue sources. I discussed a number of revenue source possibilities (slide 15), the ad hoc committees I had appointed (slide 16), the 125th anniversary celebrations that year, the importance of going “green,” and that I had initiated an IEEE President’s Suggestion Box (slide 30) which was certainly available to staff too.

I concluded by speaking about the importance of the staff-volunteer team and how, “…together we comprise a formidable team!” (slide 33). 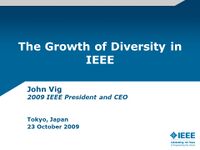 This was a short (6 slides) talk at the Tokyo Section meeting in which I focused on IEEE’s geographic and technical area diversities. I pointed out that the majority of student members had been in Regions 7 to 10 since about 10 years earlier, and that the trend is that the majority of higher-grade members will reside outside the USA within a few years. I also pointed out that, if counted by country of birth, the membership is more balanced than it appears. I added that, I, for example, was born in Hungary, Region 8 but yet, I am counted as an American.

IEEE’s technical area diversity has also grown - from the members consisting almost entirely of EEs in the beginning, to where 100K members today are other than EEs. I mentioned that I, for example, am a physicist by training. 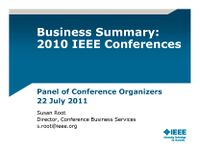 2010 Conferences State of the Business

This is a good overview of IEEE’s conference business during the period 2005 to 2010.

Slide 6 shows that the number of conferences that had been technically cosponsored by MGA grew ~11-fold.

Slides 7 to 9 show the explosive growth of conferences in region 10 during the period.

Slide 10 shows the conference size distribution by attendance vs. year. Most conefernces’ attendance was in the 100 to 299 range. Three conferences had more than 1,000 attendees. 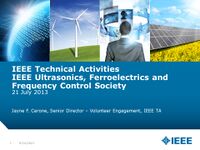 This was an invited presentation at a UFFC-S AdCom meeting by Jayne Cerone, senior TA staff.

Slide 8 is an org chart of IEEE.

Slide 43 shows the org chart of the Technical Activities Board.

Slides 44 to 47 lists the technical societies, councils, standing committees and divisions of TAB.

2013 Salient IEEE Stat’s From My (J. Vig) Presentation at the Sensors Council’s AdCom meeting at an IEEE SENSORS conference

The presentation took place in 2013 but most of the statistics are as of 2012.

Gross revenues from conference events were about $110M. Not shown here are that these revenues included about $30M from exhibits and $2M from educational activities (tutorials, workshops, short courses). Also not shown is the part of packaged products revenues that are due to conference publications (proceedings). 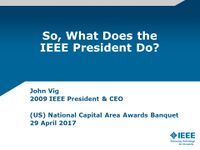 2017 So, What Does the IEEE President Do - Talk @ NOVA Awards Banquet

2017 So, What Does the IEEE President Do - Talk @ NOVA Awards Banquet

In 2017 the then chair of the Northern Virginia (USA) IEEE Section invited me to be the banquet speaker at their annual Awards Banquet. He suggested that I describe what the IEEE president does and talk about the highlights of my experiences as the 2009 IEEE President, so, that is what I did.