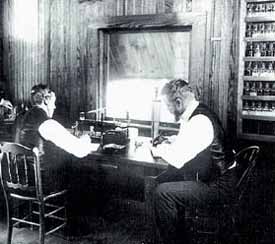 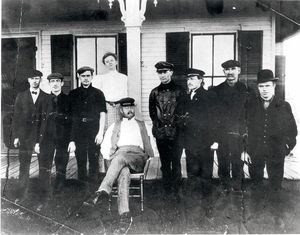 On Christmas Eve, 1906, Canadian Reginald Aubrey Fessenden (1866-1932) broadcast the first music and voice program transmitted over long distances. Transmitting from a station he built on Brant Rock, Massachusetts, Fessenden’s program included two musical selections, a poem, and a short talk. Wireless operators as far away as Virginia and ship wireless operators within a radius of several hundred miles heard this first radio program. Although the idea of radio receivers as household items was not even imaginable until after World War I and the relaxation of military restrictions on radio use, Fessenden’s Christmas Eve broadcast was an important early demonstration of radio capability.

Fessenden had a varied background that led to this achievement, which IEEE has designated a Milestone in Electrical Engineering and Computing. At various points in his life he worked as a school principal, chief chemist in Thomas Edison’s research laboratories, chief electrician at Westinghouse Electric Company, and professor of electrical engineering. In 1900 Fessenden began to conduct experiments in wireless telegraphy for the United States Weather Bureau and became interested in voice transmission. He developed the principle of amplitude modulation (AM). AM superimposed electric waves vibrating at the frequency of sound waves on a constant radio frequency, resulting in the modulation of the amplitude of the radio waves into the shape of sound waves and a steady transmission. In the years after the broadcast Fessenden himself remained active in scientific research. He worked on wireless signals, radio compasses, and submarine signaling devices as well as long distance radio transmission.

Retrieved from "https://ethw.org/w/index.php?title=Fessenden%27s_Christmas_Eve_Broadcast&oldid=145056"
Categories:
This page was last edited on 4 January 2016, at 18:55.
About ETHW
Policies and disclaimers