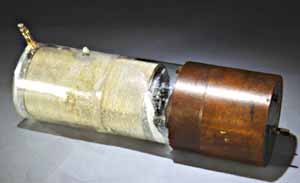 The 1927 version of Farnsworth’s image dissector. He received a patent for the image dissector in 1930, and successfully defended that patent against Vladimir Zworykin and David Sarnoff. Courtesy: Smithsonian Institution.

Philo T. Farnsworth, one of the pioneers of electronic television, invented a special type of electron tube for use as a camera tube or imaging tube in television systems. This tube, for which he filed a patent in 1927, was called the Image Dissector. To understand how an Image Dissector works, it is best to simplify the concept. In the simplification, the image dissector “sees” the outside world through a glass lens, which focused an image through the clear glass wall of the tube onto a special plate, which was coated with a layer of cesium oxide. When light strikes cesium oxide, it emits electrons, so you could think of the special plate like a mirror that “reflects” an image made of electrons, rather than light. This invisible electron “reflection” was aimed at a small detector circuit, which captured the electrons so that they could be amplified and transmitted to a television receiver.

Farnsworth’s Image Dissector worked pretty well, but it was not sensitive enough to capture scenes unless there was lots of light. Very hot and bright arc lights sometimes had to be used, and these made it hard for people to stand near the camera. Although Farnsworth improved the tube later and showed how it could be used for TV, his competitors at RCA, most notably Vladimir Zworykin, were working on a different tube they call the Iconoscope. When commercial broadcasts began in the late 1930s, Farnsworth’s tube was left behind. However, it had certain advantages over the Iconoscope, and it remained in use for many years, but not for regular TV. There were certain uses of closed-circuit TV where an Image Dissector was useful, such as when engineers wanted to monitor the bright, hot interior of an industrial furnace.

Eventually, Farnsworth won a patent battle with RCA over his claim to have invented the first “all electronic” television camera, but that victory would have been more glorious if his technology had become the standard in TV broadcasting.

Retrieved from "https://ethw.org/w/index.php?title=Farnsworth%27s_Image_Dissector&oldid=174973"
Categories:
This page was last edited on 10 April 2019, at 14:06.
About ETHW
Policies and disclaimers