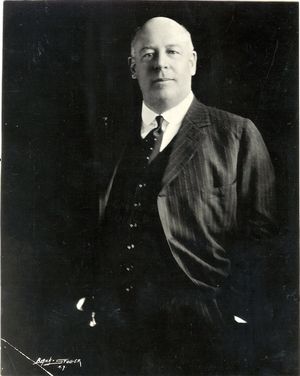 Farley Osgood, AIEE President, 1924 - 1925, a traveling engineer who made inspections and installations for the New England Telephone and Telegraph Company. He also served as vice president and general manager of Public Service Electric and Gas Company (PSE&G).

Doctor Osgood was born at Chelsea, Mass., in 1874. In 1897, he graduated from a 6-year course at Massachusetts Institute of Technology, part of the time between 1894 and 1897 being spent in the engineering department of the American Bell Telephone Company at Boston.

Between 1897 and 1898, he was traveling engineer for the New England Telephone and Telegraph Company, covering their territory in Massachusetts, Maine, and New Hampshire, making inspections and installations. In 1898, he went to New Jersey with the New York and New Jersey Telephone Company, acting as chief clerk in the operating department, as special plant engineer, as confidential man to the vice-president, and as division manager, until 1904. In the latter year he became chief engineer and general manager of the new Milford (Conn.) Power Company. Here he had charge of the construction work for the company, and organized its operating forces.

The second phase of Doctor Osgood's career began in 1908, when he joined the organization of the Public Service Electric Corporation of New Jersey (now Public Service Electric and Gas Company) as general superintendent. In 1917, he became vice-president and general manager of this company, remaining in this position until 1924, when he retired to undertake private practice in New York as a consulting engineer. Doctor Osgood maintained this latter activity until his death October 6, 1933.

Doctor Osgood has served the Institute in many capacities, having been manager 1911-14, vice-president 1914-16, as well as president. He was chairman of the New York Section 1921-22, and has been a member of the following committees: Edison Medal, executive, finance, safety codes, standards, coordination of Institute activities, education, meetings and papers (now technical program), and Institute policy. He had also been the Institute's representative on many bodies, including the electrical committee of the National Fire Protection Association, the national joint committee on overhead and underground line construction, joint power factor committee, Charles A. Coffin fellowship and research fund committee, American Engineering Council, John Fritz Medal board of award, and the U.S. national committee of the International Electrotechnical Commission.

He was a member of the New York Electrical Society and the former National Electric Light Association. In 1925 he received the honorary degree of doctor of engineering from Rensselaer Polytechnic Institute.

Retrieved from "https://ethw.org/w/index.php?title=Farley_Osgood&oldid=173644"
Categories:
This page was last edited on 14 February 2019, at 19:36.
About ETHW
Policies and disclaimers