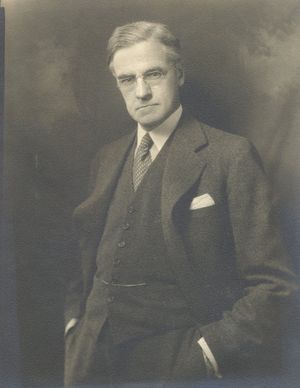 F. Malcolm Farmer, AIEE President, 1939 - 1940, was a member of several standardization organizations, and he was also a published author.

Frank Malcolm Farmer, vice-president and chief engineer of Electrical Testing Laboratories, New York, NY, was AIEE president from 1939 to 1940. Born at Ilion, NY, March 28, 1877, Mr. Farmer was graduated from Cornell University with the degree of mechanical engineering in 1899. In 1903, after 1.5 years in the test department of the General Electric Company at Schenectady, NY, and 2.5 years in the inspection division of the United States Navy at Brooklyn, NY, he joined the staff of Electrical Testing Laboratories, Inc. (then known as the Lamp Testing Bureau) as a technical assistant. He became engineer in 1906, chief engineer in 1912, and vice-president in 1929. Concurrently, he was instructor ad Cooper Union night school of science from 1902 to 1906, serving under the late Professor William A. Anthony.

Mr. Farmer has been particularly active at various periods in several standardization organizations; as chairman of two committees and as president (1924-25) of the American Society for Testing Materials; as chairman of two committees of the standards council of the American Standards Association and of the council (1936-?); as a member of the electrical standards committee of the United States National Committee of the International Electrotechnical Commission, and the instruments and measurements committee of the power test codes committee of the American Society of Mechanical Engineers. He is a contributor to several reference books, and author of a book on electrical measurements and of many papers given before engineering and technical societies. His Institute paper on "The Performance of High Tension Papers" in 1926 received both the national best paper prize and the regional best paper price. He is at present a member of the board of United Engineering Trustees, Inc., and of the Engineering Societies monographs committee, and chairman of The Engineering Foundation, on all of which bodies he represents the Institute.

Retrieved from "https://ethw.org/w/index.php?title=F._Malcolm_Farmer&oldid=145759"
Categories:
This page was last edited on 25 January 2016, at 17:47.
About ETHW
Policies and disclaimers