Research Plan: My primary sources are IEEE paper and Internet forum of social networking. I also refer some of the material from Comupter History Museum.

Expert Interview: Although we do not particularly have one advisor who experts in the social neworking area, I did manage to get some opinions from other experts. I attended facebook info session at SJSU, and one of the facebook development department's manager suggested me to ask questions on facebook.com/press. I ask questions about the security issues on facebook and how can they ensure the user's privacy information will be safe for the future social networks. The answer of the future social network security is on the last section.

The first email was sent between the two machines sat right next to each other. The only connection between them was the ARPANET (“Advanced Research Projects Agency Network”). APRANET was sponsored and created by the U.S. Depaartment of Defense and later lead to the development of Internet.

"SNDMSG" was a program which can deliver messages by appending to a file on the same computer. It allowed a user to compose, address, and send a message to other users' mailboxes. A mailbox was simply a file with a particular name. At that time, the sender could only append the file, they could not read or overwrite what was already in the mailbox.

"CPYNET" was a file transfer program which writes and reads files on remote compute. Ray Tomlinson decided to incorporate "SNDMSG" with "CPYNET", so the messgae could direct through network connection to remote mailboxes in addition to appending messages to local mailbox files.

Ray Tomlinson is credited with being the one to decide on the "@" sign for use in e-mail. Tomlinson said the content of the first e-mail was “something like "QWERTYUIOP"”.

A bulletin board system (BBS) is a computer application dedicated to the sharing or exchange simple messages on a network. The BBS became the primary kind of online community through the 1980s and early 1990s, before the World Wide Web arrived.

A BBS may be accessible from a dial-up modem, Telnet, or the Internet. Because it originated before the graphical user interface (GUI) became prevalent, the BBS interface was text-based.

Usenet is a worldwide distributed Internet discussion system. Users read and post messages (collectively termed news) to one or more categories, known as newsgroups. Usenet is very similar to bulletin board system (BBS) in many respects, and is the precursor to the various Internet forums today.

The difference between a BBS or Internet forum and Usenet is the absence of a central server and dedicated administrator. Usenet is distributed among a large conglomeration of servers that store and forward messages to one another called news feeds. Individual users may read messages from and post messages to a local server if a user is subscribed to a certain group.

site users selected a "city" in which to place their web pages. The "cities" were named after real cities or regions according to their content. For example, computer-related sites were placed in "SiliconvValley". The business-related sites were assigned to "WallStreet".

Yahoo Inc. bought GeoCities in 1999. They shut down the service at United States, and today GeoCities is only available at Japan.

It gave users the freedom to personalize their online experience by publishing their own content and interacting with others with similar interests. theGlobe.com made headlines by going public on November 13, 1998 and posting the largest first day gain of any IPO in history up to that date.(606% increase of initial share price)

The company's stock price collapsed from 850 million to barely 4 million in less than 3 years. The company closed its operations in 2008.

SixDegrees.com was a social network service website and it was based on the Web of Contacts model of social networking. It was named after the six degrees of separation concept (everyone is on average six steps away from any other person on Earth) and allowed users to list friends. Users could send messages and post bulletin board items to people in their first, second, and third degrees. It was one of the first social networking websites in the format now seen today.

Today, SixDegrees.com is only open to people who were previously members. New members are only permitted if they are invited.

It has become a social gaming site in June, 2011. The service became popular in Southeast Asia and is a major site in that region of the world.

Myspace is a social networking service owned by Specific Media LLC and pop star Justin Timberlake. In August 2011, Myspace had 33.1 million users. From 2005 to 2008, Myspace was the most visited social networking site in the world, and in June 2006 surpassed Google as the most visited website in the United States. In April 2008, Myspace was overtaken by Facebook in the number of users.

Facebook first launched at Harvard University and originally created as a way to connect college students. As of July 2011, Facebook has more than 800 million active users.

Facebook was founded by Mark Zuckerberg and his college friends.The Web site's membership was initially limited to Harvard students, but was expanded to other colleges in the Boston area, the Ivy League, and Stanford University. It gradually added support for students at various other universities before opening to high school students, and eventually to anyone aged 13 and over.

Twitter is an online social networking sites that enables its users to send and read text-based posts of up to 140 characters known as "tweets". Twitter quicly gained worldwide popularity, with 200 million users as of 2011 generating over 200 million tweets per day. 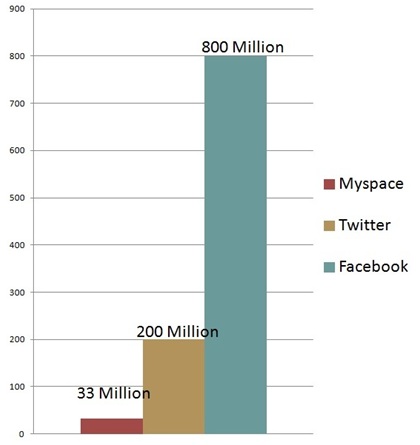 Based on my research, I predict the following four features and the trend of future social networks.

This trend has become popular in the past two years, but it will grow even faster in the next few years. I believe that everything we do in our lives will connect with social networks. For example, the news we read, the music we listen to, and the food we like will connect with social networks, so all of our friends will know immediately what we are doing and understand our tastes and favorites.

The Social Network Should Monitor My Social Lives[edit | edit source]

In a world with a single social graph, user would be able to import his existing personal social graph into any new service, and immediately begin enjoying the new service without having to wait for his friends to catch up. In order for social networks to monitor my social activities, I think we could enhance the "tag" feature on Facebook. Every user can be tagged in a photo or at a place. I propose that the system should check the relationship of everyone in the tag. If any two people are not friends with each other, the system will send "friends invitation" to both of them automatically, instead of having users to send the request on their own.

Security has become the number 1 issue in social networks today. In the beginning of December, 2011, even Facebook CEO Mark Zuckerberg's facebook account had been hacked. There is no best solution for now, but here are the 3 points I got from facebook press room.

In the past, Facebook used HTTPS(Hypertext Transfer Protocol Secure)only when user entered his password. If the encryption is enabled, we can see a small lock icon that appears in the address bar, or just a green address bar. Facebook now applies HTTPS encryption to all browsing done on the site. Although the encrypted pages take longer to load, and some of the apps may not support it, HTTPS should be a trend and necessity for all the social networking sites in the future.

If a user is logged in at US at night, and login again in China in the next morning, it is qualified as suspicious activity. The system should send users warning e-mail, or ask users to verify their identities to make sure the account was not compromised.

Many sites around the web use a type of challenge-response test called a "captcha" in their registration. The purpose of this test is to verify that you are a human being and not a computer trying to game the system. However, since they are only meant to defend against attacks by computers, it is vulnerable to human hackers.

Instead of showing a traditional captcha on social networking sites, Facebook show user a few pictures of his friends and ask him to name the person in those photos. Hackers might know your password, but they don't know who your friends are. This is a very effective way to identify users, and it should be adopted by other social networking sites.

In summary, being discipline and careful is still the most important key to ensure your privacy. In my opinion, creating a more complex password, logging out when you finish using, and avoid putting sensitive information online are the best policy.

2. The History of Social Networking, http://www.fastcompany.com/1720374/the-history-of-social-networking

Retrieved from "https://ethw.org/w/index.php?title=Evolution_of_Social_Networking&oldid=83386"
Categories:
This page was last edited on 2 January 2013, at 16:19.
About ETHW
Policies and disclaimers