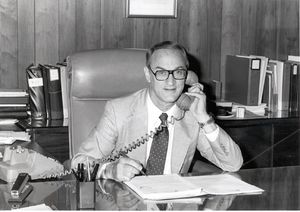 He worked at Sperry Gyroscope Company in New York as a project engineer on the development and field tests of a military radio hyperbolic navigation system, predecessor to LORAN C/D. A significant contribution was the development of very high speed, electro-mechanical, dry circuit switches to work with tube-type circuits. In 1956 he was stationed in Maui, Hawai'i, USA, as lead engineer in a successful experimental system to detect and locate electromagnetic pulses from nuclear tests in the Pacific Ocean.

In 1957 he joined General Dynamics's Convair Division in San Diego. He was engineering supervisor of the development and implementation of Telemetering Data Processing Stations in San Diego and Cape Canaveral. The San Diego Station was the largest of its kind in the free world, with the capability to convert all telemetered launch and flight data from a missile test to readily readable engineering unitswithin 24 hours. Astronaut John Glenn's medical data was received from overhead passes for display in real time on CBS and NBC television networks in the United States. He also became responsible for the company's engineering of automated test equipment.

In 1965 Herz became chief engineer and deputy program manager for a U.S. Army digital position location and communication system for evaluating maneuvers using personnel, vehicles, and aircraft with two-meter accuracy. After its completion he worked on avionics studies and proposals of early concepts of a space shuttle using fly-back boosters, with responsibility for instrumentation, performance monitoring, displays, and timing. He became designated chief engineer of the Boeing/Convair team for the Space Shuttle External Tank Competition.

Herz was a Fellow of IEEE, the Chinese Institute of Electronics, and previously of the American Association for the Advancement of Science. He served as governor of the American Association of Engineering Societies, president of Eta Kappa Nu, president of the Council of Engineering and Scientific Societies, executive director and treasurer of the IEEE Foundation, president of IEEE Aerospace and Electronic Systems Society, and IEEE vice president for Technical Activities. A member of HKN's Beta Beta chapter, he was awarded an Sc.D (h.c.) by Manhattan College in 1992. Eric Herz died on 5 December 2016.

Both before and after his years as IEEE Executive Director, Herz served as an active IEEE volunteer in a wide range of positions. The extensive list follows:

Retrieved from "https://ethw.org/w/index.php?title=Eric_Herz&oldid=180809"
Categories:
This page was last edited on 12 August 2020, at 15:52.
About ETHW
Policies and disclaimers