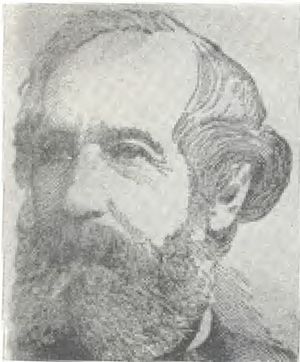 Cyrus West Field was born November 30, 1819, in Stockbridge, Mass. His father was a clergyman. At the age of 15 he entered a mercantile house in New York, but when about 20, went into business for himself and soon became prosperous. He entered the paper manufacturing industry and serviced the penny press, which mass-produced cheap tabloid-style newspapers. Field made huge profits and soon became one of the richest men in NYC. He retired at the age of thirty-four with a $250,000 fortune and bought a house in Manhattan’s Gramercy Park. In the early 1950s, he funded the Andes expedition of the landscape painter Frederic Edwin Church and commissioned him several paintings.

In 1853 he partially retired and spent several months in travel. Meeting a Canadian engineer, who had attempted to lay a subterranean telegraph line across Newfoundland, Mr. Field's imagination was immediately fired with the idea of laying a submarine cable across the Atlantic ocean. From this time, January 1854, until the transatlantic cable was successfully completed July 27, 1866, Mr. Field worked unceasingly in the accomplishment of this endeavor with Peter Cooper, Abram Stevens Hewitt, Moses Taylor and Samuel Morse. In 1855, they formed the American Telegraph Company, merging and acquiring other companies and consolidating them. He put a large part of his own funds into the enterprise, and succeeded in interesting many others in the venture. The first cable was received from England and was to be laid across the Gulf of St Lawrence, but during a gale the cable was cut in order to save the ship after 40 miles had been laid. Additional financing, which became necessary, was secured in England, and by an appropriation of the U.S. Congress. Starting from the shore of England, 335 miles of cable were laid, when the cable parted on August 11, 1857. An agreement was reached with Englishmen John Watkins Brett and Charles Bright and with funds collected mainly in London, Liverpool, Manchester, Glasgow and supported by both the British and the American governments, the Atlantic Telegraph Company was formed. During the financial panic of 1857, Field suffered heavy losses though he made a comeback the very next year. The Civil War slowed down the cable project and Field still needed more funds.

In 1858, a cable was started from each shore, and after considerable difficulty, was spliced on July 29. While celebration of this event was going on, the cable parted, and it was not until 1865 that the work of laying the cable was again begun. The now famous steamship "Great Eastern" was used in this endeavor, and after unsuccessful attempts, the laying was completed in 1866. Many honors were bestowed upon Mr. Field in the United States, England, France, and Italy, for his success. Mr. Field subsequently became interested in the development of elevated railways in New York City, and in other submarine cables.

Field died bankrupt on July 11th, 1892, at the age of seventy-two, having lost all his fortune in bad investments. The Epitaph on his tombstone read, “Cyrus West Field, To whose courage, energy and perseverance, the world owes the Atlantic telegraph”.

Mr. Field was elected an Honorary Member of the AIEE on May 17, 1892, and shared with Professor Farmer the distinction of being the only American elected to honorary membership until the election of Thomas A. Edison in 1928.