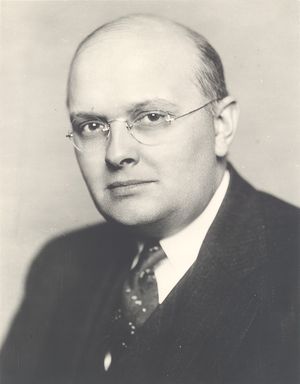 Cyril Moreau Jansky, Jr. was born in Michigan on 28 June 1895. He moved frequently in his youth as his professor father traveled from one job to another. He did his undergraduate and graduate work at the University of Wisconsin, where his father had settled as a professor of electrical engineering. He earned his BA in physics in 1917 and a master’s degree in 1919. While a student, Jansky helped start radio station 9XM. He began teaching in 1920 at the University of Minnesota.

Jansky played a critical role in shaping the nation’s use of radio. From 1922 to 1925, he was a member of four conferences that helped establish government radio regulation and laid the groundwork for the 1927 Radio Act. Jansky also helped establish the National Association of Broadcasters. In 1930, he and Stuart Bailey, a former student, formed Jansky and Bailey Company which helped further radio technology and utility. The firm built- and then operated—W3XO, the first FM radio station in Washington and only third in the US. Jansky’s radio expertise was well recognized. During World War II, Jansky traveled to Britain to help find ways that radio technology could overcome operational challenges.

After the war, Jansky became intrigued by maritime communication. He helped develop ways to use radio for ship navigation in a project on the Great Lakes. This work would lead to international invitation as others became interested in seeing how radio could be better used in radio communication and navigation.

Jansky retired from Atlantic Research Corporation, which had merged with his company, in 1965. He was given an honorary doctorate from the University of Wisconsin in 1970. He was IRE president in 1934. Jansky was married to Marguerite Summis and had two children. He died in 1975.