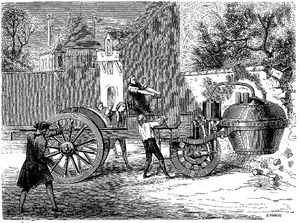 Around 1770, approximately half a century before serious experimentation began on tracked locomotives, a French artillery officer named Nicolas-Joseph Cugnot conceived the notion that a steam engine could replace the four horses needed to drag an artillery caisson.

The Newcomen steam engine had been doing productive work in England since 1710, but steam power had yet to be applied to moving vehicles.

After a demonstration that it was practicable, however, the idea went no further, perhaps because France was not involved in military operations that caused any great demand for moving heavy artillery.

It also appears that Cugnot's invention was the victim of the same kind of squabbling that Billy Mitchell was to encounter 160 years later and which slowed the evolution of airpower. Its demise might have had an additional cause. While it was the first self-powered land vehicle, it was also reputed to have caused history's first automobile accident. It is said to have run away and demolished a brick wall. There is some question as to whether this really occurred.

In any case, although a prototype was shown to be entirely capable of carrying an adequate load at least as fast as marching troops, it turned out to be caught in a dead end. The prototype was finally donated in 1799 to what is now CNAM, the National Conservatory of Arts and Crafts in Paris, and that was the end of its development.

It is still in existence, although parts seem to have disappeared through scavenging. Cugnot went on to retire from the military with a pension. The pension was withdrawn during the French revolution and later reinstated. He died in 1804.

Cugnot's artillery cart (fardier in French) used a pair of cylinders mounted side by side at the front of the carriage to engage a pair of ratchet wheels on either side of a single drive wheel. The system used pressurized steam rather than Newcomen's vacuum, which would have required cylinders of unmanageable diameter.

Cugnot's ratchet and pawl mimicked a similar arrangement that was being used at the time by Robert Fulton and some earlier steamboat experimenters. Converting the reciprocating motion of a piston to rotation has always been fundamental to vehicle development. Fulton later replaced the ratchet arrangement with a connecting rod and crankshaft.

Cugnot's fardier has never been entirely forgotten. A somewhat crude replica was constructed in Germany in 1935 for a documentary film on steam power. The film was never released after Hitler learned that the early work had been done in France and England.

Cugnot is well remembered in his home town of Void-Vacon, France, where he is commemorated by a monument. A new replica of his machine will take part in a "Festival of Steam" in that city in July 2012.

The replica was constructed in the United States by Alain Cerf, the founder and president of the international Polypack Corporation. Cerf saw the fardier at CNAM and found it particularly appealing because of his interest in front-wheel-drive vehicles.

Cerf is the owner of the Tampa Bay Automobile Museum, which houses more than 50 restored classic automobiles. His interest in the Cugnot fardier led him to look at the German replica.

After contracting to have that replica moved to Florida, he discovered some inconsistencies that sent him back to study the original in the CNAM. He has been able to construct a full-size replica using copies of existing components and a few parts that, as an engineer, he designed from intelligent guesses. One important discovery was that the boiler in the machine in the French museum could not have been original equipment. It appears to be from a smaller machine. This lends credence to the story that the vehicle was damaged during the reputed runaway incident.

According to Cerf, who wrote a book, Nicolas Cugnot and the Chariot of Fire, Cugnot was sponsored by General Jean-Baptiste Vaquette de Gribeauval, who was reforming the French army. The first minister, the Duke de Choiseul, supported Gribeauval, but fell out of favor at court and was fired. Gribeauval's star dimmed, and Cugnot's project came to an end.

The story of the Cugnot fardier is another example that innovation alone is not enough to assure a place in history. What is also necessary is a successful reduction to practice. The steam fardier missed this because there was no real demand for it. A serious need did not arise for another century when the Franco-Prussian War broke out.

Retrieved from "https://ethw.org/w/index.php?title=Cugnot%27s_Fardier&oldid=121057"
Categories:
This page was last edited on 5 November 2015, at 20:37.
About ETHW
Policies and disclaimers