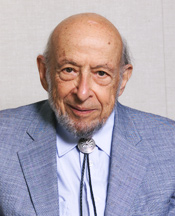 Chauncey Starr was an American electrical engineer who was an expert in nuclear energy.

Born in Newark, New Jersey, Starr received an electrical engineering degree in 1932 and a Ph.D. in physics in 1935 from Rensselaer Polytechnic Institute.

Starr was Vice President of Rockwell International and President of its Atomic International Division. In 1967 he became the Dean of the UCLA School of Engineering and Applied Science. Six years later he founded the 'Electric Power Research Institute' (EPRI) and was the EPRI's first president. He is the only President Emeritus of the EPRI.

Starr was a member of the Board of Directors at the George C. Marshall Institute, a member of the Board of Science Advisors of the Science and Environmental Policy Project (SEPP) and like most other members of that board he signed the Leipzig Declaration on Global Climate Change. Since EPRI received funding from the oil industry, his signing was questioned by some, since the declaration starts with "As independent scientists concerned with atmospheric and climate problems ..."

Starr died at his home in Atherton, California from natural causes. The day before his death he celebrated his 95th birthday at an EPRI ceremony.

Retrieved from "https://ethw.org/w/index.php?title=Chauncey_Starr&oldid=154625"
Categories:
This page was last edited on 12 April 2017, at 13:51.
About ETHW
Policies and disclaimers