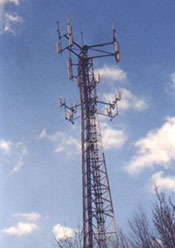 A typical base station antenna array mounted on a tower.

As you drive along the highway, you may notice cellular towers or cellular base stations appearing every few miles. A base station is the interface between wireless phones and traditional wired phones. It’s what allows you to use your cell phone to call your home phone. The base station, a wireless system, uses microwave radio communication. It is composed of several antennas mounted on a tower and a building with electronics in it at the base. When you make a call on your cell phone, the cell phone and base station communicate back and forth by radio, and the radio waves they use are in the microwave region of the electromagnetic spectrum.

The base station antenna is mounted on tall towers because from this high point it is easier to stay in communication with cell phone users, who are often near the ground. The actual antenna elements of a base station are usually less than ten centimeters (about 4 inches), but may be grouped into clusters or “arrays” with heights of about a meter (about 3 feet). They need to be mounted on a tower to overcome obstacles, such as trees, hills, or tall buildings, that stand between the base station and your cell phone. You might see several racks of antennas at different heights along the tower. Each rack actually belongs to a different cellular or PCS service provider. Because the tower structure is so expensive, it is often economical for service providers to rent space on a tower that is owned by a competitor, or a third party. Most cells are divided into three sectors, and so each antenna rack will have a triangular shape. Each face of the rack will usually have three antennas installed.

Of the three antennas, two are for receiving and one is for transmitting. Two are used on the receive side so that the base station can compare signals and select the best antenna for each user within the cell. This is known as 'diversity' reception to more equally manage the power differences between the cellular base station transmitter and the small battery powered cellphone transmitter. The cellular tower transmitting antenna is usually placed between the two receiving antennas. Even though the receive frequency is different from the transmit frequency, the antennas are separated by several meters because of the large difference in power levels.

The physical size of the antennas is generally related to the frequency of their operation, eg, the 450Mhz Nordic Mobile System circa 1990 used antennas around 4m tall, wheres say the 1900MHz GSM systems use much smaller antennas to achieve similar gain and antenna radiation patterns. There are two types of cellular antennas used, Omnidirectional and Sector antennas. Omnidirectional antennas are generally only used in low traffic volume areas, or for very small or indoor 'cells'.

Under the tower is usually a small building that houses the electronics. To transmit calls, the base station requires a powerful transmitting amplifier to generate strong signals. This “power amplifier” is linked to the transmitting antenna by a length of coaxial cable. Connected by cable to the receiving antennas are low-noise amplifiers that can detect the weak incoming signals and separate it from any background noise that is present.

A bank of electronic circuits called the transceiver rack connects to the low noise and power amplifiers, and converts their radio signals into digital signals, and vice versa. The transceiver is connected to the electronic switching device that routes calls between the base station and the main telephone system.

The electronic switching function is known as the "Mobile Switching Centre" (MSC) for GSM, AMPTS, NMT and CDMA systems, and for 3G/4G mobile systems it is known as the "Media Gateway" (MGW)/ "Gateway MSC Server" (GMSC).

Elsewhere in the base station are supporting components such as the base station controller, which is like a computer that monitors and controls various functions so that a person does not have to be present to operate the station. An AC/DC power rectifier system converts AC power supplied by the power company to DC power that is needed by the electronic circuits. Most base stations also have a backup DC power system comprising lead/acid or Gel batteries connected together to provide 24/48volts. If the AC power fails due to a blackout, the battery backup system keeps phone/data calls connected, usually scaled to provide about 4 hours operation.