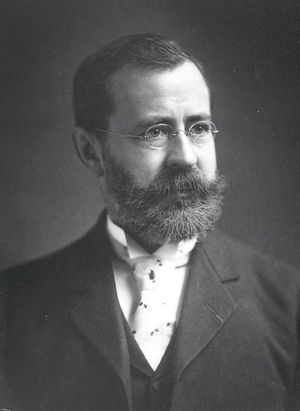 ONE of the outstanding figures in the electrical engineering world was Carl Hering, a pioneer in the field of design and construction of electrical apparatus. He was a productive researcher in electrochemical and electrophysical fields, and the discoverer of several fundamental natural laws.

He was born in Philadelphia, March 29, 1860, and was graduated in 1880 with the B.S. degree from the University of Pennsylvania, teaching there the next year as instructor in mathematics and assistant in mechanical engineering. In 1887 he received the M.E. degree and in 1912 the university conferred upon him the honorary degree of Sc.D. In 1882, becoming interested in electrical engineering, recognized then as a new and important branch of the art, Doctor Hering obtained a transfer to the department of physics. The following year he went to Germany to take courses at Darmstadt, teaching in the Polytechnikum there and working in Frankfort as chief engineer for Henry Moehring and Company, which manufactured and installed motors and dynamos. Upon his return to Philadelphia in 1886, he established a consulting practice which he continued until his death, May 10, 1926, specializing in work on electric furnaces, underground electrolysis and electrochemical and electrophysical processes.

He started the first comparative life tests of incandescent lamps in 1884, at the Electrical Exposition in Philadelphia, of which he was the assistant electrical engineer. By 1890 he had made extensive researches into storage batteries, obtaining numerous patents from the results of his work; he also investigated the regeneration of battery solutions. His work on electric furnaces began in 1900 with tests for the reduction of arsenic ores. Some 6 years later, while designing and operating electric furnaces, he discovered the "pinch" effect. He also made other discoveries showing that electromagnetic forces act upon the material of the conductor. In 1909 he applied these forces to impart rapid motion to molten masses and, based upon this principle, he invented an electric furnace in wide commercial use.

Doctor Hering was a voluminous writer, aiming to bridge the gap between pure and applied science. In 1883 he computed conversion factors for electrical and mechanical energy, publishing a comprehensive treatise in 1904; later he recalculated all electrochemical equivalents. In 1892 he was technical editor of the Electrical World and in 1893 he established and compiled the "Digest of Electrical Literature."

He served the Institute as committeeman, first local secretary for Philadelphia (1888) and national vice-president (1891-93;1895-98), standing firmly for the maintenance of Institute ideals throughout the whole period of his membership. He was a founder and president of the American Electrochemical Society and a member of the Franklin Institute, Illuminating Engineering Society, and American Association for the Advancement of Science. He was appointed officer of Public Instruction by the French Government in 1889 and decorated a Knight of the Legion of Honor in 1891. He was a delegate to a number of important national and international conventions.

Retrieved from "https://ethw.org/w/index.php?title=Carl_Hering&oldid=145426"
Categories:
This page was last edited on 19 January 2016, at 21:11.
About ETHW
Policies and disclaimers