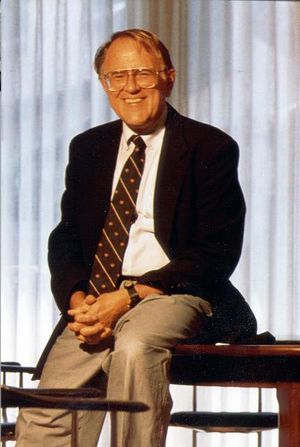 Gordon Bell was born on August 19, 1934 in Kirksville, Missouri and worked as an electrician at Bell Electric until he entered Massachusetts Institute of Technology where he obtained his S.B. (1956) and S.M. (1957) degrees. In 1958, he was a Fulbright Scholar to Australia, and during 1959-1960 was a member of M.I.T.'s Speech Group.

In 1960, Mr. Bell joined Digital Equipment Corporation and was responsible for Digital's first minicomputers and timesharing computer. During 1966-72, on leave from Digital, he became Professor of Computer Science and Electrical Engineering at Carnegie-Mellon University (CMU). He and Allen Newell co-authored Computer Structures (1971), rewritten in 1982 with Dan Siewiorek. Computer Structures posited notations and taxonomies that remain in use.

In 1972, Mr. Bell returned to Digital as Vice President of Research and Development, and was responisible for Digital's products. He led the development of DEC's VAX (1975-1978) and the VAX Computing Environment, introduced in 1980.

Mr, Bell founded Encore Computer Company in 1983, and was responsible for one of the first multiple microprocessor computers. In 1986, he became the first Assistant Director of the National Science Foundation's Computing Directorate, where he led the National Research Network panel and was a co-author of the High Performance Computer and Communications Initiative. In 1988, he was Vice President of Engineering at Ardent Computer, which built the first graphics supercomputer.

Gordon Bell was a computer industry consultant-at-large working on computer-re lated projects-especially parallel processing. He has been involved in the design of many products and research projects, including 50 computers, a dozen of which were multiprocessors. He has co-authored six books and many papers about computer structures and most recently, startups. In April 1991, Addison-Wesley published High Tech Ventures: The Guide to Entrepreneurial Success, describing the Bell-Mason Diagnostic, for anlalyzing new ventures.

Mr. Bell is a member of various professional organizations including the AAAS (Fellow), ACM, IEEE (Fellow and Computer Pioneer), and the National Academy of Engineering. His awards include: the Mellon Institute Medal, and the IEEE Computer Society McDowell and Eckert-Mauchly Awards. He participated in the founding ofMCC and SRC, and is a founder and director of The Computer Museum, Boston. He is also a director of several companies involved in computing including Cirrus Logic and Visix Software.

President George H.W. Bush awarded Mr. Bell The National Medal of Technology in 1991 "for his continuing intellectual and industrial achievements in the field of computer design; and for his leading role in establishing cost-effective, powerful computers which serve as a significant tool for engineering, science, and industry".

Mr. Bell is married to Gwen Bell; they have two children, Brigham and Laura. He resides in Los Altos, California and Boston, Massachusetts, and his interests include start-up ventures, bicycle touring, skiing, and underwater photography.