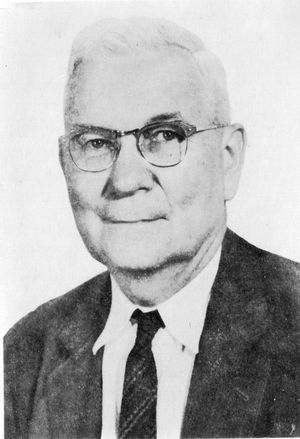 Bernard Edward Lenehan was born February 18, 1901 in Deep Valley, Pennsylvania. He received the Bachelor of Science degree from Carnegie Institute of Technology in 1921. Upon graduation from Carnegie he joined the Westinghouse Electric and Manufacturing Company and has remained with that company for his entire professional career. He was selected for special advanced training in B. G. Lamme's design school, following which he was assigned to instrument development and design in the Supply Engineering Department.

During these early engineering years Mr. Lenehan invented and developed a number of unique instruments which have had wide application. These inventions include: a narrow-range frequency meter with a four-cycle span; a repulsion vane a-c ammeter and voltmeter, having a superior scale linearity; a line of motor-operated servo-type electrical recording instruments; a current-balance type of telemetering system.

In the late twenties, Mr. Lenehan continued to invent and develop related types of measurement devices. Some of the more successful inventions and developments include:

As can readily be seen, Mr. Lenehan has been a prolific inventor. His inventions prior to age 36 resulted in 32 of the 70 United States patents which he holds. He has been awarded four Westinghouse special awards for outstanding patents and meritorious disclosures.

In 1952, Mr. Lenehan was made advisory engineer to the Meter Division. This was followed in 1956 by his elevation to the position of consulting engineer. In the late nineteen forties, he participated in the development of instrumentation for corona-loss measurement on the 500-kv Tidd high-voltage project. More recently this scheme was modernized for application to the Apple Grove 75 0-kv test project. The problem of corona-loss measurement is especially difficult, since it involves the measurement of a relatively low power level at extremely low power factor. His solution, involving an astatic system of servo-type null-deflection with taut-band suspension, produced results with very high accuracy and precision.

Mr. Lenehan has often been cited by his co-workers, customers' engineers, and others with whom he has worked and conferred, for his remarkable insight in developing simplified analyses for involved or difficult problems, as well as his very broad knowledge with depth, and his ability to communicate complex answers in understandable terms. He has the rare ability to analyze a new problem for which only fragmentary data are available by using fundamental analysis. The graphic picture he develops makes it possible to arrive most directly at the optimum answer.

Professionally he has been an active AIEE member, having served on instrumentation technical committees for over 25 years. He was Chairman of the AIEE Special Instruments and Auxiliary Apparatus Committee. He was author or co-author of about twenty technical papers and articles, of which three were published in the AIEE Transactions. Mr. Lenehan represents the AIEE on the American Standards Association Sectional Committee on Electrical Instruments.

He was an inveterate reader with a remarkable memory. In spite of having completed his formal education in 1921 in the "pre-electronic" days, he has the rare ability of staying in the forefront of new knowledge and techniques as they develop. He has made several trips to Europe to study foreign instrument developments and practice. He acquired advanced mathematical knowledge and has the ability to apply it practically. He was continually sought out by his associates and others for consultation on new and difficult problems.

Mr. Lenehan and his wife Genevieve had two daughters, Ann and Laurel, one of whom was married just recently. For relaxation he sometimes turns to photography but more often he uses his spare moments for reading, especially on technical subjects.

The contributions of Mr. Lenehan to the field of electrical measurements are well documented by his writings as well as by the many patents which have been issued to him. This, coupled with his inherent modesty and constant willingness to help others, as testified to by many of his friends and associates have made him the outstanding choice for the 1962 Morris E. Leeds Award.

Retrieved from "https://ethw.org/w/index.php?title=Bernard_E._Lenehan&oldid=172368"
Categories:
This page was last edited on 8 January 2019, at 20:07.
About ETHW
Policies and disclaimers