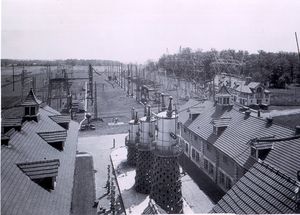 Arthur Oswin Austin was one of the pioneers and leading authorities on high-voltage transformers, insulators, and lightning effects on power transmission lines. Austin was born in Stockton, California, U.S.A. on 28 December 1879, the son of Oswin Alonzo and Mary Louisa (Hamman) Austin. He was the eldest of three brothers, all of whom were engineers. Arthur, or A. O. Austin as he preferred to be known, was a good student at Stockton's elementary and secondary schools, preferring scientific subjects and showing a mechanical aptitude. He matriculated at Stanford University, painting houses and doing camera work to help pay for his education. He graduated from Stanford in 1903 with a Batchelor of Arts degree in electrical engineering.

Upon graduation, Austin took a position with the General Electric Company of Schenectady, New York and Pittsfield, Massachusetts for approximately a year before returning to California to take a job on the engineering staff of the Pacific Gas and Electric Company of San Francisco where he was in charge of insulator inspection and development. In 1904, Austin invented the petticoat suspension insulator disc, a type which went into general use for suspension insulators. In 1905, he began working for the Lima Insulator Company in Lima, New York until the plant was destroyed by fire in 1908.

In 1909, he began working for the Akron High Potential Porcelain Company in Barberton, Ohio, which became the Ohio Insulator Company, and later the Ohio Brass Company, Barberton Division. In addition to being the factory manager of the Barberton plant, he also served on the board of directors of the holding company. In 1926, Austin bought the estate of O.C. Barber, who had made his fortune manufacturing matches. The estate became the setting for the second of the four high voltage laboratories established by Ohio Brass. Austin presented a paper "A Laboratory for Making Lightning" in Paris, France in 1929.

In 1933, he opened his own consulting firm, A. O. Austin, Inc. He continued to serve the Ohio Brass Company as a consultant. He was credited with thirty-four inventions or major developments have been credited to Austin. The "cap and pin" suspension insulators used in the construction of a 110 kilovolt power transmission line built in 1909 from Niagara Falls to Ontario were his invention. Much of the data used in developing methods of protecting aircraft from lightning strikes came from experiments conducted at the High Voltage Outdoor Laboratory at his farm.

A. O. Austin published a number of papers in AIEE journals. Here is a list of them.

The IEEE History Center gratefully acknowledges the materials and assistance given by John F. Wiitibschlager, High Voltage Lab Manager 1963-1993, in writing this article

Retrieved from "https://ethw.org/w/index.php?title=Arthur_Oswin_Austin&oldid=145306"
Categories:
This page was last edited on 18 January 2016, at 17:57.
About ETHW
Policies and disclaimers