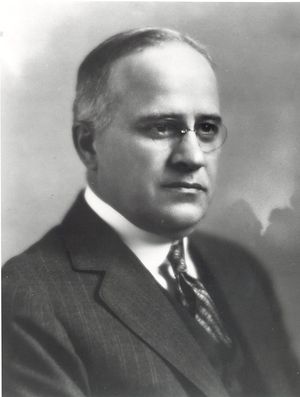 Arthur W. Berresford, AIEE President, 1920 - 1921, worked as an engineer for the Brooklyn City Railroad Company where he overhauled motors and assisted with trolley line construction. He later worked for the Riker Electric Company, which manufactured rheostats and electric controlling devices.

In the field of electric motor control, Arthur William Berresford occupies an outstanding place. from observations made in early postgraduate days, Mr. Berresford became convinced that proper control devices would make possible extended use of electric motors and generators, and to the problems of construction and application he bent all his characteristic energy, inventiveness and ability to direct and coordinate the work of others.

He was burn in 1872 in Brooklyn, and in 1892 graduated from Brooklyn Polytechnic College with the degree of B.S. in electricity; the following year he received the degree M.E. in electricity from Cornell University. His first job was electrician for the Brooklyn City Railroad Co., overhauling motors and assisting in trolley line construction, etc. It was a small beginning, in his opinion, but very probably many of his ideas were forming which materialized later, as the next year, 1894, while employed in sales and installation work for the H.B. Coho Company, he carried on experimental work of a "private nature".

Then he was designer for the Riker Electric Company for about a year, going to the Ward-Leonard Electric Company in 1896 to take charge of the detail design of the apparatus and the testing of all material shipped. This company manufactured rheostats and electric controlling devices. In 1898 he organized his own manufacturing business with 2 associates, purchasing the defunct Iron clad Rheostat Company and renaming it the Iron Clad Resistance Company. In 1900 he sold the concern to The Cutler-Hammer Manufacturing Co., entering the engineering department and becoming superintendent in 1901. Later he was made secretary and in 1905 general manager and vice-president.

In many problems, the rheostat as such plays merely an incidental part, and the knowledge, application and devising of means for meeting the problems form by far the more important part, and in this phase of the work Mr. Berresford demonstrated his productiveness and ability as a shop manager and director as well as a designer. He was in charge of and responsible for the entire output of the Cutler-Hammer co. and directly in touch with and responsible for the detail engineering and designing as well as the manufacture of such intricate devices as have made possible hoisting and conveying machinery, electrically operated printing presses, steel mill motors, elevators, etc.

During the war Mr. Berresford was chairman of the general war service committee of the electrical manufacturing industry. In 1926 he entered the field of electric refrigeration as vice-president of the Nizer Corporation of Detroit, which merged to form the Electric Refrigeration Corporation. Since 1929 he has been managing director of the National Electric Manufacturer's Association. He has given unstintingly of his time to Institute affairs, as manager (1909-12), vice-president (1912-14) and as committeman. He is a member of other technical societies and the recipient of various medals and awards.

Papers of A. W. Berresford