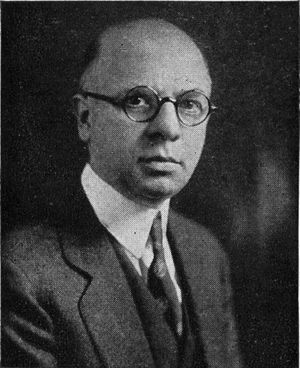 Archer E. Knowlton was Associate Professor of Electrical Engineering at Yale University, and has been engaged in college teaching since 1910. He has also been Electrical Engineer of the Public Utilities Commission of Connecticut since 1911, has served on other governmental and professional society committees and has done general consulting engineering. On leave of absence from Yale during the remainder of the academic year he will be connected with the Electrical World as Associate Editor. He has been very active in Institute affairs since 1921 serving on Section, District and National Committees, and was Chairman of the Meetings and Papers Committee.

He started teaching at Trinity College where he was Instructor in Mathematics and Physics from 1910 to 1914. He was Assistant Professor of Physics at the same institution from 1914 to 1919. He came to Yale University, in 1919, where he held positions in the Electrical Engineering Department as Instructor, Assistant Professor, and Associate Professor.

In addition to extensive work with the Public Utilities Commission of Connecticut from 1911 to date, Mr. Knowlton also served as Deputy Administrative Engineer of the U. S. Fuel Administration in 1918-1919 and on the Northeast Superpower Committee of the U. S. Department of Commerce in 1924.

He became a Member of the AIEE in 1911 and has served as Secretary and Chairman of the Connecticut Section, as Chairman and member of the National Instruments and Measurements Committee, and as member of the national Meetings and Papers Committee of which he was Chairman.

He was a member of the Society for the Promotion of Engineering Education and of Sigma Xi. He has served as technical advisor of the International Electrotechnical Commission, as member of technical divisions of the National Electric Light Association, on committees of the American Engineering Standards Committee and on the Connecticut Committee on Standardization of Electrical Practise.

He has contributed to the technical press many articles dealing with instruments and measurements, valuation, and other subjects.

Retrieved from "https://ethw.org/w/index.php?title=Archer_E._Knowlton&oldid=195249"
Categories:
This page was last edited on 3 October 2022, at 16:47.
About ETHW
Policies and disclaimers