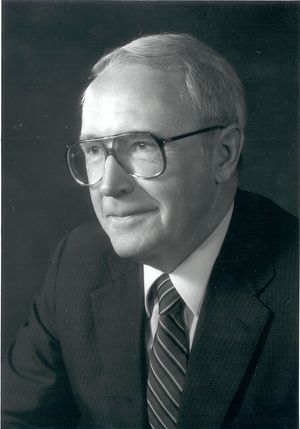 Andrew F. Corry was born on October 28, 1922 in Lynn, Massachusetts, graduating from Lynn Classical High School in 1940. He received a BSEE degree from the Massachusetts Institute of Technology in 1947 and completed the Advanced Management Program at Harvard Business School in 1966. He served in the Army Signal Corps from 1943-1946 attaining the rank of First Lieutenant.

Mr. Corry worked as a cooperative student from MIT at Boston Edison Company in 1942 and in 1946. He joined the Company in 1947 as an engineer in the Laboratory. From 1947-1969 he held various engineering and supervisory positions in the areas of system planning, overhead and underground transmission and distribution design, development of standards, product and systems testing, and research and development.

From 1969 to 1972 Mr. Corry served as Assistant to the Executive Vice President with responsibility for overall research and development activities, relationships with universities and special projects, and acted as corporate representative to various industry R&D groups and committees.

In 1972 he became Director of Engineering, Planning, and System Operations, and in 1975 he became Vice President - Electric in charge of electric systems operations and non-nuclear engineering and construction.

Presently, Mr. Corry is Senior Vice President. He has responsible charge of non-nuclear engineering and construction including planning and research, environmental affairs, and electric and steam operations.

He has had a special interest in the design and operation of underground transmission systems to serve densely populated urban areas at voltages up to 345,000 volts and has pioneered industry research and development of these systems. He was active in the Electric Research Council which established the Waltz Mill high voltage cable-test facility in the early 1970's - the largest facility of its kind in the world. He has continued to influence the direction of R&D in transmission systems as a member of the Research Advisory Committee of the Electric Power Research Institute. He has authored a number of publications in this field.

Among the numerous industry and professional committees he has served and chaired was the Insulated Conductors Committee of IEEE. He was a member of this Committee from 1954 to 1970 and its Chairman from 1967 to 1969. From 1971 to 1978 he served as US Representative to the Study Committee on High Voltage Insulated Cables of the International Conference on Large High Voltage Electric Systems (CIGRE). He is Chairman of the US Technical Committee of CIGRE and Vice President of the US National Committee.

Andrew Corry was elevated to the grade of Fellow in the Institute of Electrical and Electronics Engineers in 1974 and elected to the National Academy of Engineering in 1978. Election to the Academy is the highest professional distinction that can be conferred on an engineer and honors those who have made important contributions to engineering theory and practice, including significant contributions to the literature of engineering.

His interests include photography and travel both at home and abroad. He is a follower of the arts especially ballet and the opera, and he is an avid reader. He is a widower and has three children and two grandchildren.

Retrieved from "https://ethw.org/w/index.php?title=Andrew_F._Corry&oldid=172020"
Categories:
This page was last edited on 20 December 2018, at 20:35.
About ETHW
Policies and disclaimers