Amplifiers and the movies 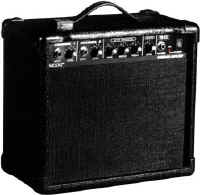 This article was initially published in Today's Engineer on January 2003

John Pierce, the Bells Labs engineer who pioneered communications satellites, once wrote that amplification was the heart of electronics. Most of the time this heart is out of sight, but not always. Many moviemakers have made prominent use of amplifiers.

Electric guitars and their amplifiers come first to mind, as seen in countless movies such as the Beatles' "Hard Day's Night" (1964), "Wayne's World" (1992), and Spike Lee's "Summer of Sam" (1999). They are featured in the mock documentary "This is Spinal Tap" (1984) about a heavy metal band. We are shown an amplifier that is innovative in that all the controls go to '11' rather than to '10'; the rationale is that "Most blokes, you know, will be playing on ten" and "Where can you go from there?" And the impressive sight of equalizers and mixing boards occurs in many movies, such as "Saturday Night Fever" (1977) and "Back to the Future" (1985).

Another frequent use of amplifiers in movies is in public address systems and in bullhorns. The simplest handheld voice-amplifier is that appurtenance of cheerleaders, the (non-electronic) megaphone, which works by matching the acoustical impedance of the vocal tract and that of ambient space. A memorable scene in "From Here to Eternity" (1953) features a megaphone: Private Robert E. Lee Prewett (Montgomery Clift) plays taps, through a large megaphone, in memory of his friend Private Angelo Maggio (Frank Sinatra). In "A Bug's Life" (1998) a megaphone PA system sounds like an electrical system. In movies, bullhorns are often used by police, as in "Rebel Without a Cause" (1955) (directed toward the troublesome young people in the Griffith Observatory), "The French Connection" (1971), and "Me, Myself & Irene" (2000) (directed downward from a helicopter).

In public address systems, amplification confers power, or at least impressiveness. It is part of the aura and ostentation of the wizard in "The Wizard of Oz" (1939), and it is used by Mussolini's regime in "The Garden of the Finzi-Contini" (1970). In "The Wedding Singer" (1998) the power of amplified voice is explicit: a disgruntled wedding guest complains "We're paying you to sing, not share your thoughts on life!", and the wedding singer replies "Well I have a microphone and you don't ... so you will listen to every damn word I have to say!" People fight over the cables to and from amplifiers in "Strictly Ballroom" (1992), where a PA system at a dance competition is interrupted and restored, and in "Forrest Gump" (1994), where the same thing happens at a 1960s political rally.  An all time classic is the 1980 Blues Brothers mobile PA system.

Electronic amplification came to the Bell System at the time of World War I, and before that long-distance telephone service was limited. For example, in the Vincente Minnelli movie "Meet Me in St. Louis" (1944), where the action occurs in 1903 and 1904, a call is placed from New York to St. Louis, and the people need almost to shout to be understood. But in the Alfred Hitchcock movie "Shadow of a Doubt" (1943), where the action occurs contemporaneously, an older woman shouts while talking into the phone and her daughter comments "She makes no allowance for science."

The feedback howl that amplifiers can produce is a staple of moviemaking. For example, in the Woody Allen movie "Annie Hall" (1977), when Annie starts to sing at a nightclub, there is feedback on the sound system. Roger Ebert's Bigger Little Movie Glossary mentions the "Feedback Rule", which is that whenever someone uses a microphone in a movie there is feedback. In the detective movie "Insomnia" (2002) a police bullhorn, accidentally turned on, produces a feedback howl, which alerts a criminal to the presence of police and allows him to escape. A creative use of feedback occurs in "Funny Girl" (1968), where Fanny Brice (Barbra Streisand) is talking with Florenz Ziegfeld on the telephone; she puts the speaker of the telephone to the mouthpiece in order to cause howling and stop him from talking.

Retrieved from "https://ethw.org/w/index.php?title=Amplifiers_and_the_movies&oldid=174706"
Categories:
This page was last edited on 1 April 2019, at 20:39.
About ETHW
Policies and disclaimers