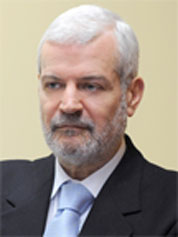 Alfonso Farina’s innovative data and signal processing algorithms have impacted a wide range of radar technologies for both civilian and military applications. Known for theoretically sound contributions that have practical relevance, Dr. Farina developed a unified approach to algorithms and processing architectures for adaptive cancellation of clutter and directional interference in ground-based, ship-borne and airborne radar systems.

His studies of phased arrays led to the realization of the advanced adaptive cancellation system for the multifunctional phased array ship-borne radar within a trans-national cooperation project; this system is in operation today on board Italian and foreign Navies ships.

Dr. Farina has been the team leader for developing modern tracking and data fusion algorithms for 3D radar in operation in NATO Countries today. He has been a technical leader of European Community programs on remote sensing with SAR, an airborne/spaceborne radar system that uses one antenna to achieve results similar to using a number of parallel antennas for high resolution remote imaging. Dr. Farina was one of the first to propose a multiradar tracking system for air-traffic control and played a key role in designing its algorithms. First implemented in Italy’s air-traffic control system during the early 1980s, the system is still in operation and has been the basis for modern systems. He is co-author of Radar Data Processing, which has been translated into Russian and Chinese.

An IEEE Fellow, he is currently director of the Integrated Systems Analysis Department at SELEX Sistemi Integrati, Rome, Italy, where he has worked since 1974.

Retrieved from "https://ethw.org/w/index.php?title=Alfonso_Farina&oldid=145190"
Categories:
This page was last edited on 13 January 2016, at 18:01.
About ETHW
Policies and disclaimers