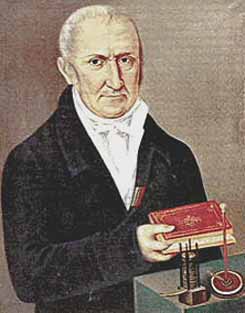 Regarded as one of the greatest scientists of his time, Alessandro Volta’s two major contributions to the history of electro-technology were the voltaic cell and his own name. Volta publicly demonstrated the voltaic pile, later known as the battery, in 1799. This was the first continuous reproducible source of electrical current. His surname, Volta, was abbreviated to become the unit of electromotive force—the volt (abbreviated as V).

Like many great inventors and scientists, Volta was an extremely driven person. When engrossed in experiments, the only way his manservant could convince him to change his clothes was by distracting him with scientific questions while helping him dress. This dedication paid off both in terms of inventions and notoriety. Volta was something of a celebrity during his time and his fans included Napoleon, who made him a count in 1801.

Retrieved from "https://ethw.org/w/index.php?title=Alessandro_Volta&oldid=145179"
Categories:
This page was last edited on 13 January 2016, at 17:40.
About ETHW
Policies and disclaimers