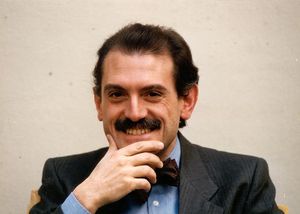 As both an academic and entrepreneur, Alberto Sangiovanni-Vincentelli propelled electronic design automation (EDA) into an indispensable engineering discipline with his groundbreaking scientific contributions, collaborations with industry and by co-founding the two largest EDA companies in the world. Dr. Sangiovanni-Vincentelli continues to be a driving force in the EDA industry, which has enabled integrated circuit design to progress from a few hundred transistors in the 1970s to today’s integrated circuits containing billions of transistors.

A world-renowned authority on all aspects of integrated circuit and system design such as numerical algorithms, circuit simulation, verification, layout, logic synthesis and distributed system analysis, Dr. Sangiovanni-Vincentelli was instrumental in bringing EDA technology to market and ensuring its commercial success. In 1983, he co-founded SDA Systems–one of two companies that merged to form Cadence Design Systems. In 1986, he went on to help found Synopsys. During the 1990s, Sangiovanni-Vincentelli developed the foundations of “platform-based design,” a comprehensive design and analysis methodology for electronic systems. In 2001, he received the Kaufman Award for his pioneering contributions to EDA from the Electronic Design Automation Consortium.

Dr. Sangiovanni-Vincentelli presently serves on the Board of Directors of Cadence Design Systems Inc., where he is Chair of the Technology Committee. An advisor to leading companies such as Intel, United Technologies, General Motors and Pirelli, he is a member of the National Academy of Engineering and an IEEE Fellow. He has served on the faculty of the University of California, Berkeley since 1976 and currently holds the Edgar L. and Harold H. Buttner Chair of Electrical Engineering. He has published 800 papers and 15 books in the areas of EDA, design methodologies, control, hybrid systems and system-level design.

Retrieved from "https://ethw.org/w/index.php?title=Alberto_Sangiovanni-Vincentelli&oldid=145171"
Categories:
This page was last edited on 13 January 2016, at 17:23.
About ETHW
Policies and disclaimers